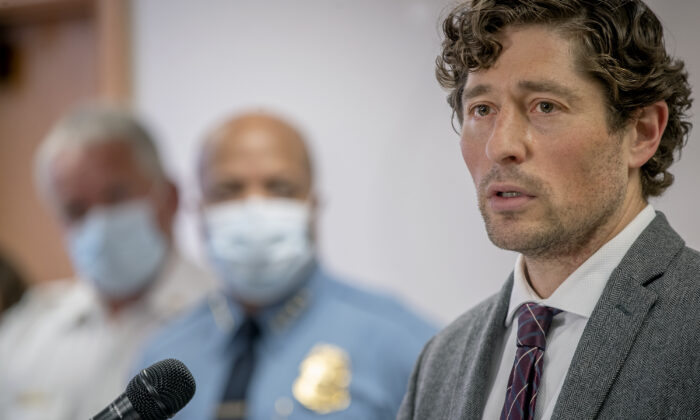 Minneapolis Mayor Jacob Frey speaks during a news conference, May 28, 2020, in Minneapolis, Minn. (Elizabeth Flores/Star Tribune via AP)
US News

Minneapolis Mayor Jacob Frey said he doesn’t approve of the pledge by some City Council members to disband the city’s police department, a move that comes as the state launched a civil rights investigation after the death of George Floyd.

“We’re ready to dig in and enact more community-led, public safety strategies on behalf of our city. But, I do not support abolishing the Minneapolis Police Department,” Frey said on June 7, according to Fox News.

Protesters have called on government officials to stop increasing funds for the police and enact legislation that would hold police officers accountable for incidents similar to that of Floyd, according to Fox News.

Nine of the council’s 12 members appeared with activists at a rally in a city park on June 7 and vowed to end policing as the city currently knows it. Council member Jeremiah Ellison wrote on Twitter that the council would “dismantle” the department, given their veto-proof majority.

City Council President Lisa Bender responded on Twitter in support of Ellison’s plans, saying they planned to “dismantle the Minneapolis Police Department and replace it with a transformative new model of public safety.”

“It is clear that our system of policing is not keeping our communities safe,” Bender said at a rally on June 7. “Our efforts at incremental reform have failed, period.”

Bender said that she and eight other council members who joined the rally are committed to ending the city’s relationship with the police force and “to end policing as we know it and recreate systems that actually keep us safe.”

In an interview with the Minneapolis Star Tribune, Bender said she would be in favor of moving from a traditional police department to a wider public safety department aimed to prevent violence and offer community-based services. Bender stressed that these are her personal thoughts and they don’t reflect that of the council.

Bender also stated that the proposal, in her opinion, would make it possible for work currently handled by the police to be delegated to social workers and medics.

The council has not yet clarified its plans regarding “dismantling” the police department.

On June 8, Ward 3 Council member Steve Fletcher wrote on Twitter that he, along with the council, will look into what it will take for them to “disband” the Minneapolis Police Department. Fletcher called the police department “irredeemably beyond reform.”

In the Twitter thread, Fletcher mentioned an alternative of starting fresh “with a community-oriented, non-violent public safety and outreach capacity.”

However, Mychal Vlatkovich, Frey’s spokesman, said that although the mayor supported “working with the community towards deep, structural reforms that address systemic racism in [the city’s] laws and in policing,” he didn’t support completely dismantling the police department in the city, the Minneapolis Star Tribune reported.

Epoch Times reporter Alan Cheung and The Associated Press contributed to this report.