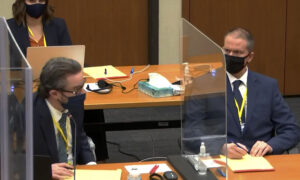 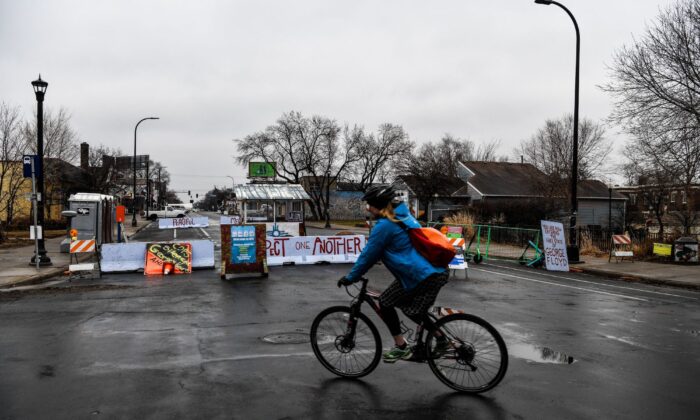 A woman rides past the barricades of the “autonomous zone” near where George Floyd died in May 2020, in Minneapolis, on March 10, 2021. (Chandan Khanna/AFP via Getty Images)
US News

The so-called “autonomous zone” around the site in Minneapolis where George Floyd died last year has become a threat to public safety and a danger to residents and businesses, a police association says.

“George Floyd Square is now an autonomous zone. They just had a homicide there,” Smith told the outlet, adding that violence in the barricaded area has been a constant problem since riots rocked Minneapolis last summer.

Police said a man was shot and killed in the area on March 6. Minneapolis Police Department spokesman John Elder told local outlet KSTP that responding officers “were met with interference” when they approached the zone’s barricades.

Miami-based reporter Brian Entin was recording material outside the zone’s barricades when he was accosted by two activists demanding that he leave.

“You’re going to be in a bad situation here in a second,” one of the activists can be heard saying in the video. “You’re being called out for what you are and you need to get out of here,” the person says.

Entin later interviewed the aunt of 30-year-old Imez Wright, the man who was shot and killed inside the zone.

“Were police able to get in and help him?” Entin asked.

“Police were not allowed to get into that area,” replied the woman, who wasn’t identified by name in the report, who added that her nephew was carried outside the zone before being taken to the hospital, where he later died from his wounds.

She said law enforcement “was not welcome” inside the zone, which she called an “atrocity,” suggesting that her nephew might have survived “had things been different.”

Asked about the atmosphere inside the zone, the woman described it as “volatile” and “militant” and that people wanting to go and support the initiative aren’t particularly welcome.

In her remarks to Fox News, Smith also said there are businesses around George Floyd Square “that get robbed by the same people two to three times a week” and that people inside the zone “just can’t get police services.”

She said the problem is most acute in the vicinity of the Third Precinct, which was burned down.

Retired Seattle police officer Steve Pomper, in a March 9 post on NPA’s website, blamed local authorities for being too lenient.

“The key takeaway here, for everyone, is SPD [Seattle Police Department] officers swiftly reclaimed their police station (unlike Minneapolis, Seattle still had a station to reclaim) and tossed CHOP/CHAZ into the anarcho-communist ash heap of history,” Pomper wrote, referring to Seattle’s now-defunct autonomous zone by its two acronyms—the Capitol Hill Occupied Protest and the Capitol Hill Autonomous Zone.

“In Minneapolis, insurrectionists destroyed an MPD [Minneapolis Police Department] precinct because the mayor wouldn’t allow the cops to do what they’re trained to do,” Pomper wrote.

On March 8, hundreds of people gathered outside the fortified courthouse in Minneapolis for the first day of the trial of former police officer Derek Chauvin, who has been charged in Floyd’s death.

Demonstrators chanted, “No justice, no peace!” and speakers implored the jurors to “do the right thing.” Many in the crowd carried banners, some reading “Justice for George Floyd” and “Convict Killer Cops.”

Floyd’s death sparked protests and riots after footage emerged showing that Chauvin restrained Floyd for an extended period with a knee to the neck.

In the interview on Fox News, Smith said Minneapolis is preparing for “inevitable rioting” because “no matter how this case turns out, there likely will be violence.”