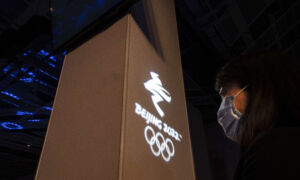 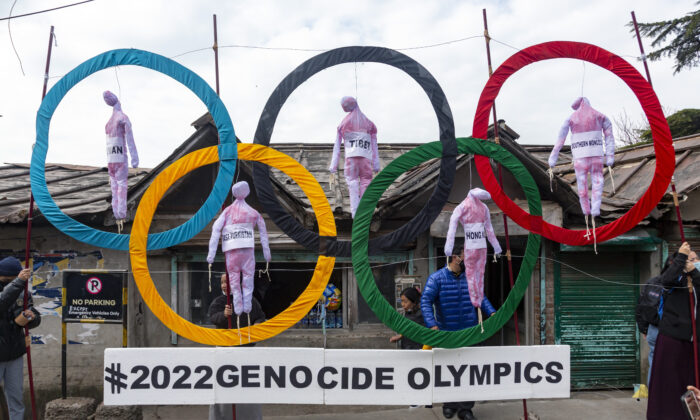 Olympic Rings are used as a prop in a street protest against the holding of 2022 Winter Olympics in Beijing in Dharmsala, India, on Feb. 3, 2021. (Ashwini Bhatia/AP Photo)
UK

Foreign Secretary Dominic Raab and Culture Secretary Oliver Dowden have been urged to announce a political boycott of the Games if Beijing refuses to allow a thorough investigation into allegations of atrocities in Xinjiang province.

Beijing has strongly denied international claims about the treatment of Uighur Muslims in Xinjiang despite reports indicating that more than a million people have been arbitrarily detained and allegations of torture and forced sterilisation.

Shadow foreign secretary Lisa Nandy and shadow culture secretary Jo Stevens have written to their counterparts setting out the need for a political response to deny the Chinese government a public relations victory.

“We have consistently pressed the Government for more robust actions to address this appalling situation, including more extensive sanctions against senior officials responsible for what is taking place in Xinjiang and more robust measures against forced labour,” the Labour MPs said.

“We are now calling on you to use the occasion of the Games to press the case for unfettered UN access to Xinjiang to conduct a full, transparent and independent investigation. This has been repeatedly sought by the UK and other governments but has not yet been realised.

“If this is not granted, the UK Government should not send ministers, royal family members or senior representatives to participate in any official duties or ceremonies at the Beijing Olympics.

“The Chinese government will want the Games to be a diplomatic success.

“A political boycott by the UK and other states would send a strong signal of the deep global concern with the plight of the Uighur and prevent the Games being a PR exercise for the Chinese authorities.”

Labour stopped short of calling for a sporting boycott, arguing that that would not be fair on competitors who have trained for four years for the chance to take part, or on the Chinese people who are not responsible for the situation.

The Opposition said the political boycott should be triggered if China has not ended its “systemic persecution” of the Uighur people and granted inspectors access to Xinjiang by Sept. 14, the opening of the UN General Assembly session in New York.

Nandy said: “For as long as China continues to block access to Xinjiang, no self-respecting government should even consider handing a PR coup to Beijing.

“The UK Parliament recently took the unprecedented step of recognising what is happening to the Uighur is genocide. After a decade of Tory prime ministers rolling out the red carpet to Beijing, this must be the turning point.”