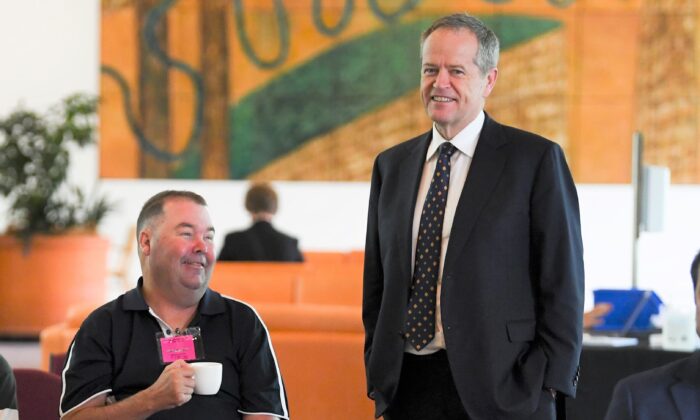 NDIS Minister Bill Shorten speaks to participants during an event to celebrate International Day of people with a disability at Parliament House in Canberra, Australia, on Dec. 3, 2020. (AAP Image/Lukas Coch)
Australia

The federal minister for the National Disability Insurance Scheme (NDIS), Bill Shorten, has said he is deeply concerned about allegations criminal gangs are stealing millions of dollars from the government’s disability scheme.

The allegations from chief of the Australian Criminal Intelligence Commission, Michael Phelan, revealed to The Sydney Morning Herald on Aug. 14 that organised gangs were using coercion and other tactics to access accounts to steal NDIS funds.

Phelan is called for the creation of a specialised multi-agency taskforce to tackle these syndicates who have been accused of stealing around 15-20 percent of the NDIS’s annual $30 billion outlay.

Speaking to ABC Radio National on Aug. 15, NDIS Minister Shorten said he had been monitoring the situation for the last couple of years as shadow minister for the scheme, but said rorting was more likely around five percent of budget.

“I think there is a problem. I said it before the election, and since the election, I’ve started alerting colleagues, pushing the agency, talking to state ministers about the need for government agencies to work together to combat the scourge of fraud,” he said.

The NDIS minister said there were three ways the system could be taken advantage of: organised criminal activity; ghosting (issuing fake invoices to fake clients); and padding invoices to claim larger amounts from the government.

“So I think there’s a range of different ways,” Shorten said. “And the other thing is, whilst it’s not fraud in the sort of crime gang sense is, just people overcharging for services, full stop.”

He called on contractors under the Scheme not to “rip-off a person with disability” just because it involved taxpayer funds.

“It’s actually scarce services going to people who desperately need them,” he said.

Shorten also said he would look into whether fraud investigative services had enough resources.

“If we need more resources, we’re going to have to find them. Because frankly, it’ll pay for itself. If we can stop some of the money being ripped off and we spend instead greater resources on fraud detection, it means that we still have a better, sustainable scheme, and people with disabilities are getting those extra hours of therapy or support or home modification, which at the moment these crooks are denying them,” he said.

This is not the first time there have been accounts of rorting in the NDIS, with the Australian Federal Police (AFP) arresting and charging a man in June on suspicion of defrauding the Scheme.

According to a media release from Shorten, it is alleged the man received more than $430,000 in NDIS payments during a five-month period to April, of which more than $314,000 had been identified as fraudulent claims.

“This action taken by the [National Disability Insurance Agency] fraud team is evidence that this government won’t allow our participants’ funding to be the target of any criminal activity,” Shorten said in June.

The NDIS was established in 2011 by the Labor government of Prime Minister Julia Gillard after an inquiry into disability services in Australia by the Productivity Commission recommended the development of such a scheme to support Australians who suffered permanent and significant disabilities.