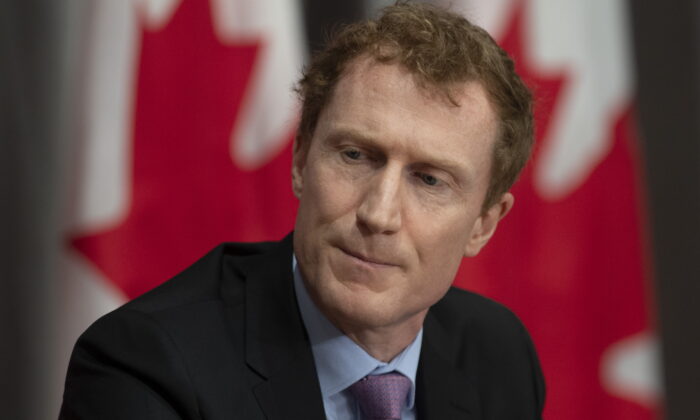 Indigenous Services Minister Marc Miller pauses as he responds to a question during a news conference in Ottawa, Canada, on June 5, 2020. (Adrian Wyld/The Canadian Press)
Canada

Crown-Indigenous Relations Minister Marc Miller said he wasn’t aware of a summer jobs grant approved by his office for the Community Media Advocacy Centre (CMAC), which has recently come under fire for hiring a consultant who has a history of making antisemitic comments.

Records show that Miller’s office granted $795 in funding to the CMAC under the 2018 Canada Summer Jobs program in his constituency of Ville-Marie, Quebec. The minister later confirmed in a statement that the total funding granted to the group was $2,882.

In a series of Twitter posts, Miller said “Not a single cent of government money should go to organizations that harbour anti-Semitic views,” and that “any sums accorded should be clawed back, regardless of the time that has elapsed.”

Not a single cent of government money should go to organizations that harbour anti-Semitic views. It has come to my attention that in 2018, the Community Media Advocacy Centre which operates in Montreal received approximately $800 as part of the Canada Summer Jobs programme.

Laith Marouf was listed as a senior consultant on the CMAC website until recently, after he was found to have made numerous antisemitic comments on his now-suspended Twitter account, using vulgar language against the Jewish community such as repeated references to “Jewish White Supremacists.”

“You know all those loud mouthed bags of human feces, aka the Jewish White Supremacists; when we liberate Palestine and they have to go back to where they came from, they will return to being low voiced [expletive] of their Christian/Secular White Supremacist Masters,” he said in one tweet on Aug. 10, 2022.

In 2021, the CMAC received a grant of more than $133,800 from the Heritage Department to build an “anti-racism strategy” for Canadian broadcasting. On Aug. 22, Diversity Minister Ahmed Hussen, who oversees the diversity and inclusion program under the Heritage Department, said a notice has been sent to the CMAC that government funding has been cut and that its anti-racism program has been suspended.

During an Aug. 29 press conference, Miller told reporters that he’d never heard of Marouf or the CMAC until recent weeks, saying that hundreds of organizations have applied for the summer jobs grants, and added that he was unsure if Marouf had joined the CMAC in 2018.

“[Marouf has] held horribly antisemitic statements that we should have known about earlier,” he said.

When asked about the vetting process for organizations that receive the grant, Miller said his riding office doesn’t decide who wins the grants.

“There are organizations that fall above a level of standard of review. They are typically well known and have been funded in the past that do laudable activities and employ some really talented people to do amazing civic work,” Miller said.

“What my office does is it looks at the large numbers that are approved, seeing if there’s any sort of disproportion in the funding objectives that we look for.”

“By no means do the 2 or 3 people working in my riding office run this programme or establish the recommended choices for the funding or have the final say in who gets funded,” Miller said on Twitter on Aug. 29.

“That said, had they been aware of this individual’s connection to the CMAC in 2018, they clearly would have requested that this organization not receive funding.”