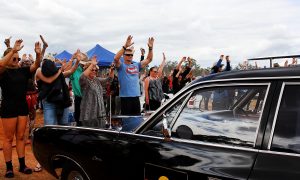 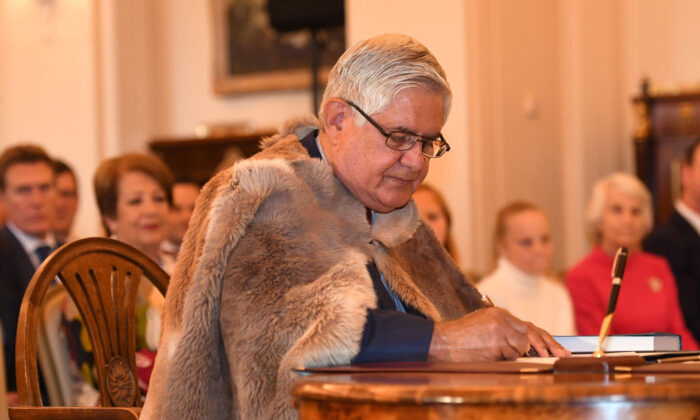 Ken Wyatt is sworn in as Minister for Indigenous Australians by Australia's Governor-General Sir Peter Cosgrove during the swearing-in ceremony at Government House on May 29, 2019 in Canberra, Australia. (Tracey Nearmy/Getty Images)
Australia

The minister for Indigenous Australians has defended blocking a push to fly the Aboriginal and Torres Strait Islander flags in the Senate.

Three Indigenous senators moved a motion on Nov. 10 to coincide with NAIDOC Week to have them hoisted alongside the Australian flag in the upper house.

But coalition senators opposed the move, narrowly defeating the motion 29 to 28 votes.

Indigenous Australians Minister Ken Wyatt says he would rather see the flags flying outside Parliament House.

Wyatt also argued the Senate was a place for people to represent their states.

The minister said there were more important issues to focus on, including suicide among Indigenous youths and access to safe drinking water.

“The lefties can have as much to say about my stance on many issues, but get real and look at the quality of life that our people need to live, not the symbolism element that some people tend to push,” Wyatt said.

“This issue of the flag should not detract from what we’re trying to achieve for the voice, for ultimately constitutional recognition and truth telling, which is what we’ve been committed to.”

Labor senator Malarndirri McCarthy said Remembrance Day was an important reminder of the power of symbolism.

“We need to fly these flags,” she told parliament.

“People say it’s symbolism but guess what? So was today. So is this beautiful poppy that I have above my heart.”

“We can chew and walk at the same time. We can have symbols but we can have practical changes in institutions that can systemically change for the better.”

Senator McCarthy used Question Time to pursue the government over its refusal to fly Indigenous flags.

Government Senate leader Simon Birmingham was asked if he would reconsider, given Liberal state governments fly the flags in parliamentary chambers.

“The government believes it’s appropriate for the Australian national flag in this chamber,” he told senators.

NAIDOC committee co-chairs John Paul Janke and Pat Thompson wrote to government senators and MPs after the vote urging them to reconsider.

Wyatt confirmed he supported NSW Premier Gladys Berejiklian’s push to change the lyrics of the national anthem from “young and free” to “one and free” to better acknowledge to country’s Indigenous history.