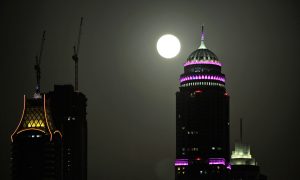 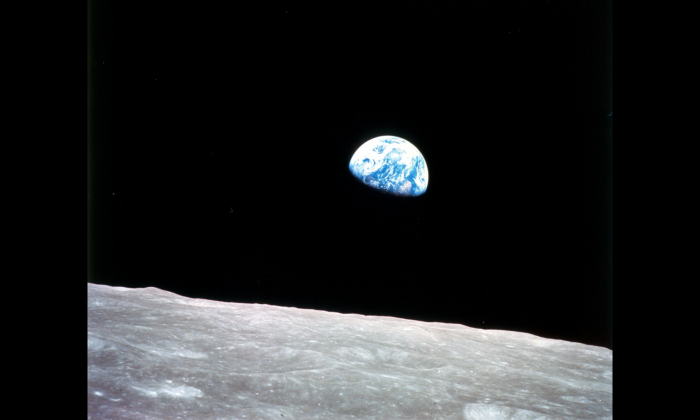 The Earth is seen from the moon on Dec. 24, 1968, in a photograph taken during the Apollo 8 mission. Private companies, as well as China and Russia, are now eyeing the moon as a resource for minerals. (NASA)
China

Mining the Moon: Plans Taking Off, but Rules Lacking

Just two years before Neil Armstrong set foot on the moon, a treaty was signed by the United States, the United Kingdom, and the Soviet Union. Signed even as the race to get to the moon was well underway, the 1967 Outer Space Treaty declared that no nation-state could ever own the moon.

The treaty, however, was written at a time when current threats were too real and visions of the future were too dim. Concepts like space tourism, orbital hotels, and companies mining the moon for minerals would have been written off as science fiction.

Fast-forward to today and you’ll find companies like Virgin Galactic ferrying wealthy tourists into space, a man skydiving from low orbit for a Red Bull advertisement, and companies like Planetary Resources and Deep Space Industries looking to mine the moon for its resources.

While the 1967 Space Treaty governs what countries can and cannot do on the moon, it leaves private companies unregulated. For countries like China, where many large companies are state-owned, the line separating the interests of government and business is unclear.

Before China’s Yutu “Jade Rabbit” moon rover malfunctioned, it was prodding the moon dirt with a bottom-mounted ground-scanning radar system searching for valuable minerals. China’s interests in these resources have been reported in Chinese media.

Ouyang Ziyuan, a senior adviser to China’s lunar program, told China’s state-run Xinhua newspaper, “Everyone knows fossil fuels such as gas and coal will be used up one day, but there are at least one million metric tons of helium-3 on the moon,” AFP reported.

Helium-3, is a valuable gas here on Earth, but its only “fuel” potential is in fusion energy—which is still highly experimental.

Russia is also eyeing the moon for helium-3, however, and plans to begin mining by 2020. The announcement was made back in January 2006 by Nikolai Sevastianov, head of Russia’s Rocket and Space Corporation Energia.

NASA has outlined its own interests in lunar mining. Its Solar System Exploration Research Virtual Institute argued in a report that mining rare minerals on the moon may be vital to national security.

The moon is rich with rare earth minerals, but NASA points out in its report, “Few see the moon as an alluring mining site, ripe for the picking of rare elements of strategic and national security importance.”

It adds that on Earth, where China controls about 95 percent of the global supply of rare earth minerals, Chinese authorities often limit exports.

“China is increasingly putting the pinch on quotas of such elements out of their country,” NASA states. “And as the scarcity of these valuable minerals grows, so too does the concern in other nations regarding the availability of this limited resource.”

The Next Wild West

The moon is well underway to becoming the next frontier, complete with space tycoons already surveying the business landscape, and under the current law it could be a very lawless frontier indeed.

The law has many holes. If companies like Bigelow Aerospace succeed in building lunar bases, there is currently no law saying they’ll own the ground it’s on. If companies like Shackleton Energy Company succeed in wrangling an asteroid to mine its resources, there is no law saying someone else can’t start mining the same asteroid as well. And there are also no laws to limit damage or destruction, or to preserve historical or visible elements of the moon.

The only limiting factor is that private companies need the blessings and supervision of their host nation for any operations, and the host nation will be responsible if anything goes wrong.

The current system is based heavily on good faith, and whether each space-faring country will play nicely is yet to be seen. A system lacking a clear legal framework has thus far worked for scientific ventures, such as the International Space Station. But history tells a different story when big businesses and competing nations turn their sights on a new frontier.

Ian Crawford, a professor in the Department of Earth and Planetary Sciences at Birkbeck College, University of London, believes that for lunar mining to go smoothly private companies will need a legal framework for their operations.

He also believes that lunar areas with scientific importance should have legal protection.

“The ’67 Treaty does not explicitly cover either of these aspects, which is why I think there is a case for updating it,” Crawford said in an email.

“Just as no nation-state can currently appropriate the moon there is a case for ensuring that private companies also cannot claim to own the moon, but nevertheless would be legally entitled to materials that they extracted from it as a result of their own private investment,” Crawford said.

As for guarding areas of scientific importance, there is proposed legislation aimed at doing just that. The 2013 Apollo Lunar Landing Legacy Act intends to create lunar national parks around historical sites, and was referred to a congressional committee in July 2013. Passing the law is going to be difficult, however, since it would conflict with the 1967 treaty.

NASA also released a proposal in 2011 to protect lunar artifacts, but following it is voluntary.

According to Dale Tietz, CEO of Shackleton Energy Company, which intends to mine the moon for water and minerals, commercialization of space started when the AT&T Telstar satellite went into orbit in 1962.

Tietz believes the 1967 treaty works as a legal framework for now, and that “In the future, as the market grows and operational needs expand, new standards and methods may arise for the benefit of all stakeholders just like they do in terrestrial environments.”