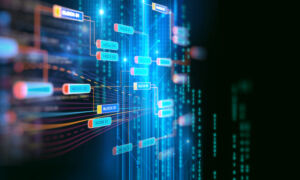 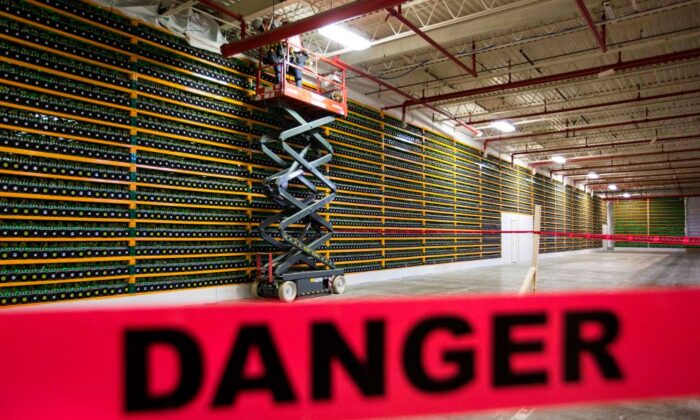 Two construction workers use a lift along a wall of bitcoin mining at Bitfarms in Saint Hyacinthe, Quebec, on March 19, 2018. (Lars Hagberg/AFP via Getty Images)
China Business & Economy

Mining Companies Flee China as CCP Cracks Down on Cryptocurrency

Jessica Mao
Jessica Mao is a writer for The Epoch Times with a focus on China-related topics. She began writing for the Chinese-language edition in 2009.
View profile
Follow
and Jennifer Zeng

After the State Council of China recently announced a crackdown on bitcoin mining and trading practices, several well-known mining pools and companies announced they are leaving China, and moving their businesses to other countries. Several mining platforms have announced that they are blocking IP addresses from China.

The “mining” of virtual currency refers to the process of mathematical computation through computer nodes for the blockchain network, and the competition of transaction validation.

BitDeer, a cloud mining platform, announced that it would block all IP addresses in mainland China from May 26 in order to cooperate with the Chinese Communist Party (CCP)’s regulations.

Also on May 26, Mars Cloud Mine also announced that it would block access to IP addresses in mainland China.

Mars Cloud Mine also announced on May 23 that some of its mining rigs would be transferred to Kazakhstan.

On May 25, BitFuFu, a time-sharing platform for miners, announced that it would upgrade its existing platform at May 26. After the upgrade, the platform would block all IPs in mainland China, further ensuring that no rental services would be provided to the Chinese region.

On May 23, Huobi, which owns a mining pool, was revealed to have suspended providing mining rigs and derivative services for users in mainland China, as well as its hosting services for users who have purchased bitcoin mining products.

On May 23, BTC.TOP, a crypto mining pool, announced the suspension of its China business. Its founder Jiang Zhuoer wrote on Chinese social media platform Weibo, “The pool mining services will no longer be open to mainland China, and we will mainly deploy mining in North America in the future.”

Most of the mining companies have chosen to go overseas under the pressure from the CCP’s regulatory policy. Kazakhstan and North America are among the most popular regions.

In addition to Mars Cloud’s announcement that some of its mining machines will be relocated to Kazakhstan, Shenzhen-based BIT Mining has also announced that it will invest in mining in the United States and Kazakhstan.

Wu Hongliang, former head of public affairs at Bitmain, told Chinese media outlet Securities Daily that China’s regulation has had a significant impact on the mining industry, and that a large number of Chinese miners are now looking for suitable sites overseas to build new mining farms, mainly in the United States, Kazakhstan, Russia, and Canada, resulting in a shortage of supply in those countries.

In addition, many miners are selling off their bitcoin mining rigs in China.

Long Dian, founder of Chinese blockchain media HuoXun, also said, “The withdrawal tide has already started, and many large mining companies have already started to seek opportunities to go abroad. In the medium to long term, the domestic mining industry will enter a contraction phase and ‘going offshore’ will become the new norm.”

3 Strikes in One Week

In a time frame of only a week, virtual currency mining and trading in China has been hit hard by the three major financial industry associations, the Financial Committee of the CCP and local governments.

On May 19, the China Internet Finance Association, the China Banking Association and the Payment and Clearing Association of China issued a joint announcement to pressure Chinese financial and payment institutions to ban the provision of cryptocurrency services and related financial products.

On May 21, at a meeting of the State Council’s Financial Stability and Development Committee, Vice Premier Liu He announced a crackdown on bitcoin mining and trading practices.

According to the measures, data centers, enterprises, Internet cafes, individuals, civil servants, and other subjects can all become subjects of punishment, and penalties include the cancellation of preferential policies, revocation of licenses, suspension and rectification, and inclusion in the blacklist of defaulters.

Violations can also be transferred to judicial organs, the CCP’s discipline inspection, and supervision organs.

In an interview with Chinese Epoch Times, Yang Cong (a pseudonym), a veteran of the cryptocurrency industry in China, said there are three reasons why the CCP fears cryptocurrencies.

First, the decentralized nature of cryptocurrencies prevents the state from manipulating exchange rates, currency issuance, or inflation and deflation.

Yang said the free and democratic nature of cryptocurrency may induce a reconstruction of social order and structure. So from this perspective, it shakes the very foundation of the CCP, and the CCP would sooner or later crack down on it.

Secondly, the CCP has implemented the digital renminbi and plans to fully launch it during the 2022 Winter Olympics. It has already started to introduce it to domestic financial institutions. To ensure the domination of its own digital yuan is another reason for the CCP to crack down on cryptocurrencies, according to Yang.

Thirdly, a large amount of RMB or USD reserves may go overseas through the anonymity and anti-counterfeiting features of cryptocurrency, which is also of grave concern to the CCP.

Yang believes that the CCP is launching a comprehensive crackdown bitcoin and all cryptocurrencies. Exchanges, digital currency related businesses, mining and pool providers, and transactions are all targeted, he believes. It is almost a total ban on cryptocurrencies.

“The CCP will not allow the high volatility of cryptocurrencies to affect the stability of the CCP regime,” Yang said.