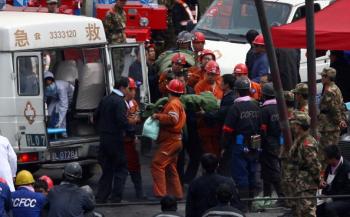 Workers wait outside the entrance to the Wangjialing coal mine as rescuers try to find more than 150 workers trapped in the flooded coal mine being built in northern China's Shanxi province on March 30, 2010. Workers accused their bosses of ignoring warning signs of danger as anger built over the accident after workers said water was noticed leaking into the pit days before the latest disaster to strike China's deadly mining industry. (PETER PARKS/AFP/Getty Images)
China

115 Miners Rescued From Flooded Mine in China

Epoch Times Staff
View profile
Follow
biggersmaller
Print
One hundred and fifteen Chinese miners have been rescued nine days after being trapped in a flooded coal mine in northern China’s Shanxi Province.

Shanxi Province Gov. Wang Jun announced on April 5 that a total of 115 men have been rescued with 38 miners still trapped underground.

Chinese media reported that the first nine miners who were rescued used their belts to fasten their bodies to the rock wall. They crawled further into the mine after being submerged in water for three days and three nights.

Miners told a rescue worker that they ate pine tree bark from construction wood poles and drank cold water to stay alive after being trapped underground for eight days and nights.

The disastrous mining accident occurred on March 28 when 261 miners working in a pit accidentally broke into an underground mine shaft. The authorities claimed that 108 miners have been lifted out, and that 153 were trapped in the flood.

However, some Chinese media suspected that more than 260 miners were trapped.

Authorities had waited until April 3, six days after miners were trapped, to make the first attempt to send rescuers into the pit to look for possible survivors.

Family members were angered by the authorities’ slow response in taking any constructive measures both before and after the accident occurred.

Accordingly to Southern Metropolis Daily, at around 2:30 a.m. on March 28, water started leaking into the Wangjialing Coal Mine. Many miners revealed that there was still no sign of a rescue team around 4:00 p.m. When miners who managed to get out went to the various offices to look for supervisors, they could not find anyone. They said, “Normally you can find supervisors at these places at any time.”

One miner said, “Such a serious accident has happened, but no one was there to take charge. All the supervisors have run away. The miners were all furious.” The miners also said that at around 3 p.m. on March 28, over 100 miners gathered and smashed doors, desks, and windows in the supervisors’ offices,” according to the same report.

Miner Ma Wen said that if the officials had paid attention to the warning signs, especially if they had decided to stop the work on the morning of March 28 when signs of danger first appeared, the accident could have been avoided.

At around 11 a.m. on March 28, Team 27 found water leaking while digging in the pit. They reported it to the mining office, “but one supervisor said that you guys just go ahead and work. It’s fine,” Southern Metropolis Daily quoted Ma as saying.

“It is good that so many people have been saved from the flooded mine, but what is more important is how to prevent this kind of mining accident caused by negligence,” independent commentator Peng Dingding said.

So far, the survivors were the ones who worked in shafts above the water level. They were trapped because the passages to the main tunnel were flooded.

China has the most mining accident fatalities in the world with a total of 2,631 coal miners dying in accidents last year, according to an official figure released by State Administration of Work Safety.