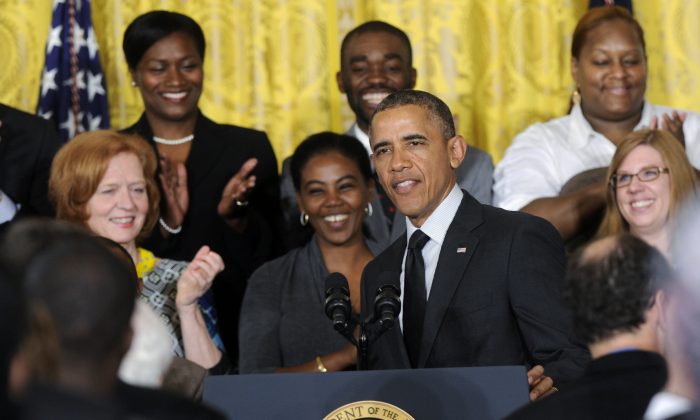 There are different ways to cast this. One might say it’s an illustration of good or bad money management. People with enough money tend to think of it that way. People with way more than enough money are already on another planet than planet food service, planet house cleaning, or planet shopping.

There are some situations where Mr. Micawber’s misery ratio is built in. Raising children on a low-wage job would be a good example. The National Women’s Law Center (NWLC) analyzed census data and found more mothers are in low-paying jobs than other workers.

Money management won’t make that work. A higher income will.

I heard this is the largest economy in the world. Am I mistaken? Can’t our corporate megaliths and our vibrant small-business sector, and our local and state governments squeeze out less than three bucks an hour more, for the little guys and dolls?

It would help everybody, and by everybody I mean the whole economy.

Opponents say it would cost jobs. I hear them. I believe them. Some jobs would go. But I honestly think it would be better for the country as a whole if all jobs paid a living wage. Because those who once earned $7.25 an hour who go up to $10.10 an hour will most delightedly spend it, making their grocery, barber, day care provider, transit, electric utility, a little more prosperous.

It would be very instructive if everyone served an apprenticeship as a poor person. Not necessarily to learn a certain trade—just to learn what it’s like to be broke.

Allow me to trot out one of my apprenticeship stories.

Scene: A pretty good restaurant, and when it had customers it did OK. But for a while there, the customers vanished. Servers don’t even make minimum wage. The idea is that tips bring them up to minimum wage, or above it. Hypothetically the restaurant is supposed to make up any shortfall, but in real life it never happens.

One of my colleagues was an ancient lady, possibly as ancient as 50. She had upright posture and a good figure, probably maintained by the cardio and resistance training entailed in running up and down carrying heavy trays. She had children. She was an expert in astrology and quick to foretell your future. She was a bottle blonde, but it was a good bottle, to steal from Raymond Chandler.

Sometimes we went home with $11 or less after a full shift. Just paying for the commute was getting to be iffy, much less paying bills.

During one dreary night, she said, “I can’t even afford to get my hair bleached, and that’s a crying shame.”

America, respect your servers, nursing assistants, cleaners, and security guards. Give them a living wage, and the dignity of well-maintained hair.