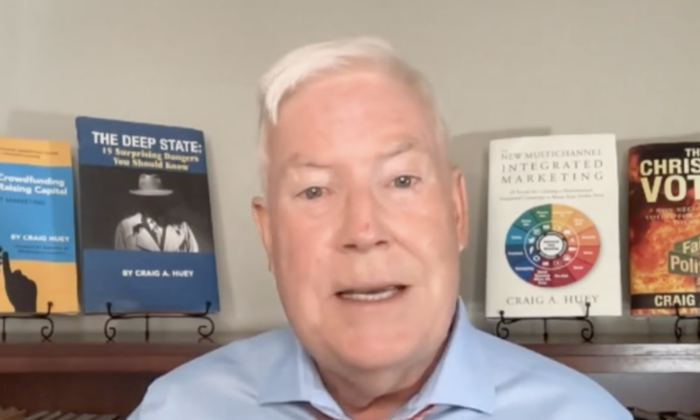 The president of The Huey Report Craig Huey interview on NTD Capitol Report Sept. 7, 2022
US News

California is seeing a substantial exodus of residents to places like Idaho, Florida, and Texas. Craig Huey, president of The Huey Report, said that California government policies are crushing small businesses and that the new minimum wage increase will only make things worse.

“It was the land of opportunity and a land of sparking new innovations and new businesses, and today it’s just the opposite,” Huey said during an interview with NTD’s Capitol Report on Sept. 7.

He said California is “chasing businesses away” and people are fleeing the Golden State “to become California refugees, exiles to free states such as Texas, Florida, and Tennessee.”

In addition, California’s Governor Gavin Newsom on Sept. 5 signed a bill, AB 257, that will steadily increase the minimum wage starting at over $15 in January 2023.

“I’m proud to sign this legislation on Labor Day when we pay tribute to the workers who keep our state running as we build a stronger, more inclusive economy for all Californians,” Newsom said in a press statement released the same day.

Huey said this minimum wage increase will either drive small businesses out of California or increase automation because business owners cannot afford the high cost of employees.

“And what I have experienced as a small business owner, is that every time the minimum wage goes up, I either don’t hire more people or have to lay some people off,” said Huey. “The minimum wage sounds great, but the devastating effects are undeniable.”

One of the areas of California business that was hardest hit during the pandemic lockdowns is the restaurant industry, business leaders of which criticized Newsom’s minimum wage increase.

“This lopsided, hypocritical, and ill-considered legislation hurts everyone,” said Joe Erlinger, President of McDonald’s USA, in an open letter. “Many economists who have studied this issue agree this bill is problematic, as has the state’s own Department of Finance.”

Harris Liu, a Sacramento-based McDonald’s franchisee, said, “Governor Newsom is creating an unequal playing field that threatens small business owners and communities across the state. Our elected leaders can and must do better.”

Homelessness and crime are other factors that are causing longtime residents to leave California, Huey said.

Despite the fact that billions of dollars are being poured into the problem of homelessness, the issue is only getting worse, and is expanding into wealthier neighborhoods, said Huey.

In August alone, Newsom announced $694 million for his Homekey program, which before 2021 was called Roomkey, to build low-income homes, and $1.5 billion for homelessness in the 2022–2023 fiscal year.

California’s solution to homelessness is based on the Department of Housing and Urban Development’s (HUD) “Housing First” model. Housing First is defined as “an approach to quickly and successfully connect individuals and families experiencing homelessness to permanent housing without preconditions and barriers to entry, such as sobriety, treatment or service participation requirements.”

Instead of supporting taxpayers and small businesses, Huey said, “businesses, retired people, people in low and middle income, they’re all paying billions of dollars and [Newsom is] trying to solve the homeless problem with government solutions that have been proven to be a failure.”

The Epoch Times has contacted California’s Department of Housing and Community development for comment.