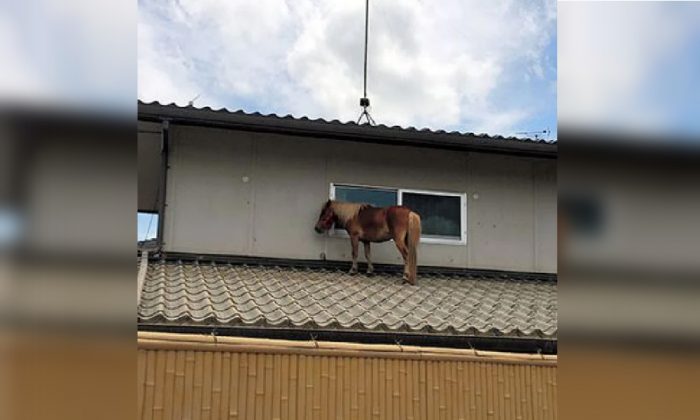 A miniature horse was found standing on the roof of a house in Okayama Prefecture, three days after it was thought to have drowned in Japan’s floods.

The news brought relief to her carers and locals, amid otherwise devastating circumstances across western Japan.

Leaf is an animal therapy horse at the Life Town Mabi aged care facility in the Mabicho district of Kakehashi, according to Asahi Shinbun. The nine-year-old horse, along with her colt, Earth, disappeared when floodwaters inundated the area. Staff were forced to evacuate all residents in the facility, and release Leaf and her colt from the farm.

A rescue team from disaster relief organization Peace Winds Japan (PJW) found Leaf stranded on a roof of a private house near the aged-care facility on July 9, reported the Japan Times. The team were seeking help to get the mare down when she fell from the roof, a 6-foot (2 meters) drop, and landed on her torso, with only minor injuries to one leg.

“I was really worried about Leaf because I could not search for her,” Mari Tanimoto, Leaf’s 49-year-old carer, told Asahi Shimbun.

Unfortunately, PJW said her young colt, Earth, was found dead, according to the ABC.

Dozens of people remain missing as authorities continue to search for them. The death toll from Japan’s floods has risen to 200, according to Reuters. Most of the deaths are from the Hiroshima and Okayama prefectures.

Heavy rains in western Japan from July 5 forced millions to evacuate the area due to floods and landslides.