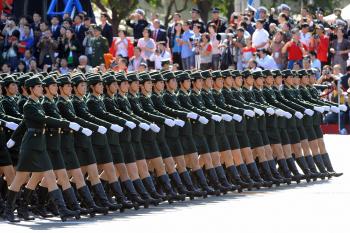 By Heng He
Print

At the National Day parade in Beijing on Oct. 1, while Western analysts were trying to spot what new weapons were on display, most of the TV audience were watching the female militia in the bright red mini skirts. But the militia were not really militia, just some pretty young women recruited to make a false impression.

They became a hot topic on Internet chat rooms and forums. Chinese netizens found that one woman leading the militia unit was the Miss Etiquette of the Beijing Olympics, and another a model for foreign carmakers.

Yet this is only part of the story. Since there had never existed female militia units, all of the members of this marching unit were recruited from the Chaoyang District, Beijing, and started training for this parade at the end of last December. It can be certain that none of them had ever fired a gun. After the parade, they will go back to civilian life. The red miniskirts they wore were designed specifically for the parade; they were not real militia uniforms at all.

These stories about the young women in the parade were widely reported and retold by Chinese official newspapers and numerous websites. But the reporting on these elaborate lies was complementary, not critical. In today’s China, lying has become part of a way of life.

How Edison Saved His Mother

One week before the parade, a Chinese teacher in Hangzhou City named Guo Chuyang made a list of “problem articles” in elementary textbooks. He divided the problems into four categories. The first one is “not in accordance with history and common sense.” One of the stories in this category is “How Edison Saved His Mother.”

As the story goes, when Thomas Edison was a young boy, his mother had her appendix removed surgically. At that time, since electric lights had not yet been invented, the operation had to be performed by candlelight. Under such weak lighting, the surgery could be a danger to the patient. Young Edison used a mirror to reflect the light to help the doctors finish the surgery, and thus saved his mother.

Mr. Guo searched every article and book about Edison that he couldn't find any trace of such thing ever having happened. Besides, at that time, such surgery had never been performed. Thomas Edison was born in 1847, while the first appendix operation took place in 1887.

Marx in the Reading Room

In the textbooks I read in elementary school in China, a story was told about how, when Karl Marx was in London, he spent most of his time in the reading room of the British Museum. Year by year, since he sat in the same chair for so long, his feet wore a hole in the floor.

I don't know how many students had doubts about this story. I know I didn't. Many years later, I read a story told by a Chinese man who studied in the U.K. Upon first arriving in London, he went to the British Museum to see the seat where Marx supposedly sat.

The librarian told him that such thing couldn't have happened since the British Museum has never reserved a seat for anyone. Besides, if the floor had been damaged, it would have been repaired immediately. The librarian also told him that many Chinese, and only Chinese, came to the library with the same request. They were all stunned and disappointed to learn the truth.

Many years later, I realized that common sense alone could expose such a tall tale, without a visit to the library being needed. Assume that Karl Marx had a reserved seat in the reading room and the floor was not repaired during that period, and a hole was worn in the floor under his seat, what happened to the floor under the other seats? Even though people changed every day in the other seats, the effects should be the same as the one person sitting continuously in the same seat. The result—every seat should have a hole under it!

Another story is about Lenin, the founder of the Soviet Union. It said that when Lenin was a kid, he once accidentally broke a beautiful vase at his aunt's home. Nobody saw it. After being told a story by his mother about how an honest and brave young boy admitted his mistake, Lenin went to his aunt and admitted that it was he who broke the vase. Of course, no one can tell if this is a true story, and it could have simply been made up by Chinese textbook writers and editors.

Both tall tales have an obvious purpose. The communist movement is one of the two major disasters in the twentieth century and is responsible for at least 100 million deaths, according to "The Black Book of Communism: Crimes, Terror, Repression." Presenting a positive image of those who created and practiced communism could help improve the image of communism itself.

The other side of this systematic lying is to demonize the opponents of communism.

Either one of the claims about Liu is a lie or both are lies: they were told by the same organization, the Central Committee of the Chinese Communist Party (CCP).

In early 2002, Li Yuqiang, the China Central TV (CCTV) journalist who reported the self-immolation and many other reports criticizing Falun Gong, visited a brainwashing center in Hebei Province. The Falun Gong practitioners detained in the center raised doubts about Wang Jindong. The video she had reported claimed he had been severely burnt, yet showed a plastic Sprite bottle full of gasoline fully intact between his legs.

Li Yuqiang acknowledged that the footage was shot afterwards to make the audience believe. The Sprite bottle between Wang Jindong's legs was put there for the footage. “If we knew it would be exposed, we wouldn't have done that,” she added.

The story didn't end there. New Tang Dynasty TV (NTDTV) broadcast an award winning film “False Fire.” The film analyzed the CCTV program about the self-immolation program and, using CCTV’s own footage, demonstrated that the event was staged. After CCTV realized how many loopholes were in its program, it simply cut out the footage highlighted in “False Fire,” re-edited the program, and released it again.

The lies in the CCTV program don’t serve any purpose anymore. CCTV knows its program on the self-immolations is a lie and everyone else knows it is a lie, but they still broadcast it.

The case of CCTV and the self-immolation video points to a general case. The Chinese Communist Party in its many campaigns has demanded that the Chinese people believe what is not true. If one didn’t lie, one would likely die. The regime has taught the Chinese people lying as a way to survive, and the big lies that have been told have been used to prop up the legitimacy of the CCP.

Of course, the story about the heroic young Thomas Edison saving his mother is not about the CCP’s legitimacy. This lie is not a means to survive. It is simply part of a way of life that the CCP has created, one in which young women soldiers march off to war in their bright red mini skirts.