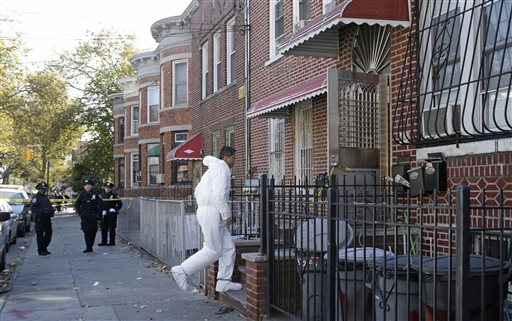 A crime scene detective leaps up the steps at the scene of a multiple fatal stabbing Sunday, Oct. 27, 2013, in the Sunset Park neighborhood of Brooklyn, in New York. Police said a mother and her four young children were stabbed to death in a brutal rampage just before 11p.m. Saturday. The working-class neighborhood is home to many Chinese immigrants. (AP Photo/Kathy Willens)
Crime and Incidents

Ming Don Chen, a Chinese immigrant, has admitted he stabbed his cousin’s wife and her four children late Saturday.

The New York Police Department told Epoch Times the suspect, 25-year-old Chen, implicated himself in the stabbings late Saturday in the Sunset Park neighborhood. Chief of Department Phil Banks said the victims “were cut and butchered with a kitchen knife.”

The stabbings happened in Sunset Park, a neighborhood in the borough of Brooklyn in New York City.

Police recovered a knife on the scene.

Chen is a cousin of the children’s father and had been staying at the home for the past week or so, Banks said.

Chen was in custody and wasn’t immediately available to comment.

Bob Madden, who lives nearby, was out walking his dog when he saw a man being escorted from the building by police. He was barefoot, wearing jeans, and “he was staring, he was expressionless,” Madden said.

Yuan Gao, a cousin of the mother, said the man had recently moved to the area and had been staying with different people.

Fire department spokesman Jim Long said emergency workers responded just before 11 p.m. to a 911 call from a person stabbed at the residence in Sunset Park, a working-class neighborhood of adjoining two-story brick buildings with a large Chinese community.