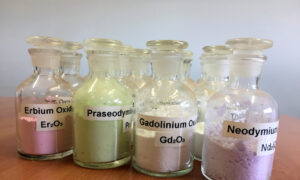 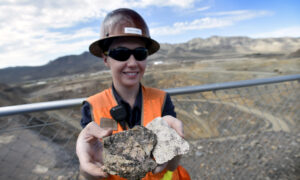 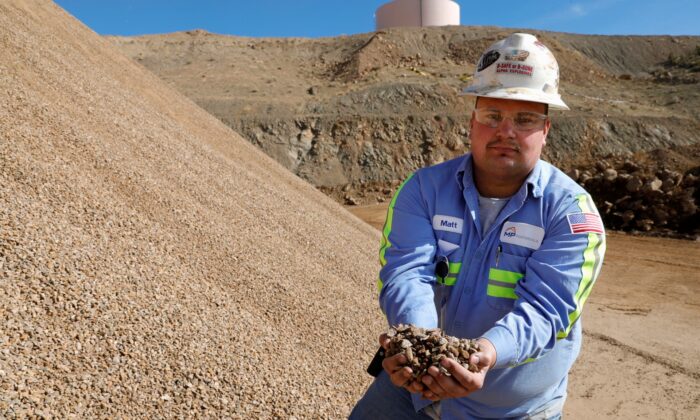 Matt Green, mining/crushing supervisor at MP Materials, displays crushed ore before it is sent to the mill at the MP Materials rare earth mine in Mountain Pass, Calif., on Jan. 30, 2020. (Steve Marcus/Reuters)
Policy

Owners of the Wheat Ridge facility for processing rare earth elements and critical minerals have received an operating permit that will enable minerals critical to advanced technology manufacturing to be mined and processed in the United States.

USA Rare Earth, LLC, and Texas Mineral Resources Corp. announced on June 18 that their Wheat Ridge, Colorado, facility has received its operating permit, with its pilot plant now in the commissioning process.

Texas Mineral said in a press release that the plant “will have the ability to produce the full range of high purity, separated rare earths as well as other critical minerals … which are essential for modern manufacturing ranging from defense applications to wind turbines, electric vehicles, smart phones, advanced medical devices, and the physical backbone of emerging 5G networks.”

The company says its objective is “to build the first rare earth and critical minerals processing facility outside China.”

The CEO of USA Rare Earth, Pini Althaus, said in a press release that the establishment of an independent, robust, and domestic rare earth metal and critical mineral supply chain is vital for the United States, “overcoming reliance on China.”

Althaus said the company’s mine and pilot plant were “essential links in restoring a mine-to-magnet domestic U.S. rare earth supply chain without the material ever leaving the United States, thereby alleviating the current dependence on China for … both raw materials and mineral processing.”

Gosar described critical minerals as the building blocks of our modern lives, as they are vitally important for special components in defense systems, health care applications, and energy generation technology.

“For years, our country has become increasingly dependent on China and other nations to fulfill our demand for minerals,” said Gosar. “The global pandemic has demonstrated the severe consequences of allowing this longstanding over-reliance on China to go unchecked.”

Waltz said that critical minerals are integral to our way of life.

“As coronavirus has unfortunately demonstrated, if China can threaten to cut off our pharmaceutical supply, they can do the same with their supply of rare earth minerals,” said Waltz. “We need to bring this supply chain back to America—and this bill will be an important step to do that.”

According to an International Energy Agency (IEA) report, REEs and critical minerals are also essential for a host of energy technologies—from renewable energy sources such as wind and solar to cutting-edge battery storage systems and electric vehicles.

Clean energy progress after the #Covid19 crisis will rely on the availability of critical minerals.

China holds some of the richest deposits of REEs in the world, and in particular around the Bayan Obo region of Inner Mongolia. Some reports claim that in 1992, Communist Party leader Deng Xiaoping said, “The Middle East has oil. China has rare earths.” China has used its position since that time to threaten both the United States and Japan with withholding its supply of REEs.

Stringent environmental protections make rare earth element production in the United States relatively expensive, as the ores must be treated intensively with chemicals to produce concentrates before extracting the elements in their pure forms. Chinese producers don’t have such restrictions. China has focused on cheaper production combined with illegal mining to force down prices for REEs in recent decades, making mining and processing in the United States cost-prohibitive.

The U.S. Geological Survey (USGS) found that in the United States in 2016, “there was no production of rare-earth ores and concentrates.” The once-prolific REE mine at Mountain Pass, California, had been mothballed and remained “on care-and-maintenance status,” until reopening in 2018 to produce more than 10 percent of global REE ore production.

According to the IEA, Chinese mines produce almost 63 percent of global REE production, with Burma (also known as Myanmar) accounting for a further 10.5 percent, and the United States producing 12.4 percent. The situation was even more grave than the statistics show, because all the Mountain Pass ore was being shipped to China for processing.

“The United States is heavily reliant on imports of certain mineral commodities that are vital to the Nation’s security and economic prosperity,” according to the order.

“This dependency of the United States on foreign sources creates a strategic vulnerability for both its economy and military to adverse foreign government action, natural disaster, and other events that can disrupt supply of these key minerals.”

MP Materials is the owner and operator of Mountain Pass mine, which the company says is the only integrated rare earth mining and processing site in North America. On April 22, the company announced in a statement that it had been selected by the U.S. Department of Defense for a contract that targeted the restoration of American domestic heavy rare earths production, and to reduce or eliminate U.S. supply chain vulnerabilities.

“We are committed to restoring the full rare earth supply chain to the United States, paving the way for the onshoring of robust and diverse industries that will thrive through global competition, world-class products, and sustainable environmental standards,” said MP Materials Co-Chairman James Litinsky.

According to a 2019 report from the USGS, REEs possess unique properties that make them essential ingredients in the manufacture of alloys, batteries, catalysts, magnets, phosphors, and other materials.

REEs aren’t easy to find in mineable concentrations, however. For example, the lightest REE, scandium, is more common in the rocks of the Earth’s crust than gold or silver. However, scandium is rarely found in concentrated quantities, as it tends not to combine in ore-forming minerals and is thus distributed more widely and at low concentrations. Significant deposits of the other rare earths are similarly difficult to find and recover.

According to USA Rare Earth, the new initiative will reinvigorate American high-tech manufacturing.

“In turn, this should provide the U.S. with job creation in manufacturing, and potentially generate hundreds of billions or more into the U.S. economy through the ability to be able to produce products in the U.S. currently being produced in China,” the company stated.