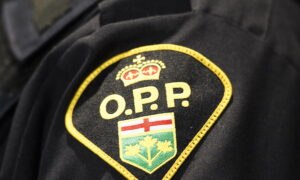 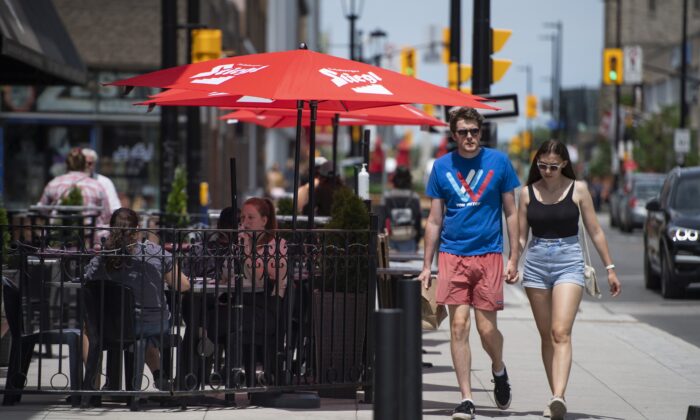 People walk past a restaurant patio open for business on the first day of Ontario's three-phase reopening plan, in Ottawa on June 11, 2021. (The Canadian Press/Justin Tang)
Viewpoints

Mindless Dogma and Groupthink: The Panic Approach to COVID Has to End

The developments of late regarding COVID cases and vaccination rates as the country begins to reopen have been very encouraging and should buttress people’s optimism after the long and gruelling year the pandemic has put us through.

A rather depressing feature of the pandemic, however, has been that whenever a moment arrives that could provide genuine reason for optimism, politicians and their rigid health advisers without fail trample all over it, the underlying message being that panic should be the default until further notice. This gives the disturbing impression that those in positions of authority never want pandemic restrictions to end.

The initial panic early last year was understandable given that so much was unknown about the virus, but the approach has since descended into a myopic obsession with eradicating COVID that has 1) proved to be woefully unrealistic and 2) harmful to the broader society.

Take the example of masks. Most Canadians have supported wearing masks to help mitigate the spread of the virus. Jurisdictions have imposed mask mandates and the majority of people have gladly followed them. But most surely see this as only temporary and something they expect to end once the pandemic subsides so they can return to normal social interaction.

But a certain faction of “COVID zero” adherents who seek to entrench masks as a normal facet of daily life are against that. In a recent op-ed published in The Globe and Mail, two doctors argue that we should not abandon masks after the pandemic ends since mask-wearing has, along with other measures, essentially helped eradicate health threats such as influenza and similar respiratory viruses.

Although the doctors rightly point out that people regard masks as “symbols of the anxiety and isolation the pandemic has caused,” they suggest that people should “come to see them as a tremendous gift we have given some of our most vulnerable citizens, protecting them from serious illness and even death.”

More broadly, they say the pandemic has offered “a key potential learning” around masks that suggests they could become the “new norm.” “We are not advocating for mask mandates or restrictive rules as they currently exist—but rather the maintenance of a new norm, based on collective goodwill and the realization of how many lives we could save by continuing this practice,” they write.

In theory this might make sense, but it fails to comprehend the nature of human beings and how masks encroach on our need for social interaction and connection. It also fails to recognize that living a normal life comes with ordinary risks, such as catching the flu or a cold, which most are willing to tolerate. Nobody would be convinced of the wisdom of mask-wearing after the pandemic subsides, and the only way to make it the “new norm” would be to impose a mandate. That would obviously not sit well with the public, who have already become exhausted by such rules.

These doctors are the kind of health professionals who are part of the team advising Doug Ford’s government in Ontario, which has distinguished itself by its enthusiasm for ineffective lockdowns. At the beginning of June, the government pushed through a motion to extend its emergency powers to December 1, with no significant scrutiny from the opposition. This will, of course, allow those in government further authority to make swift decisions and impose stay-at-home orders and other restrictions however they please. What this indicates is that Ontarians are not done with lockdowns and will likely have to endure at least one more before the pandemic is over.

It also provides more evidence of the failure of leadership in Ontario. In May, the Ontario Drug Policy Research Network at St. Michael’s Hospital in Toronto released a report on drug overdoses that captures the misery brought about by conditions during the pandemic. It concluded that fatal opioid overdoses increased by more than 75 percent after the pandemic struck in 2020, with 2,050 people dying between March and December, compared to the 1,162 who died in 2019 during the same period. The prevalence of deaths from fentanyl also increased, from 75 percent to 87 percent, during the pandemic.

Those who deny that this is a consequence of the long-term isolation imposed by government restrictions are missing the plot, to put it politely. Such problems are only exacerbated by the business closures and increase in homelessness wrought by the lockdowns, not to mention the impact of school closures on the mental health of students. However, these issues have never been seriously considered or even acknowledged by those in government. Whenever the harms of lockdown measures are brought up, the response is deflection or crass dismissal of their seriousness in comparison to the virus.

What makes this especially perturbing is that there’s no endpoint in sight to any of it and those in positions of leadership don’t appear too keen on changing their approach. All the while, the longer it goes on, the more it’s exposed as mindless dogma and groupthink. We need to call time on it.