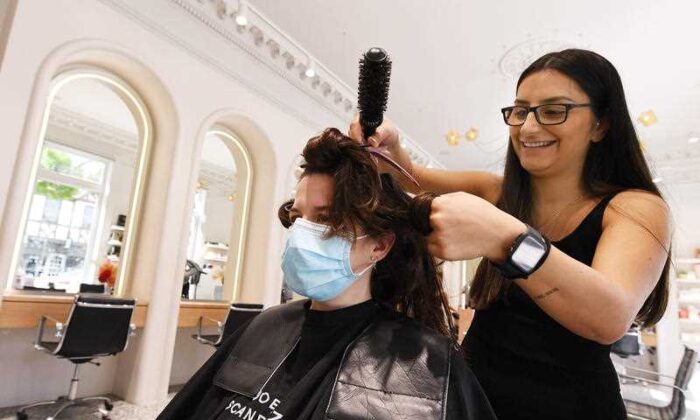 Hairdresser Caroline Shamoon of Joey Scandizzo Salon works on a clients hair in Melbourne on Oct. 22, 2021. Melbourne has emerged from the world's longest lockdown with businesses including bars, hair salons, gyms and many others open, and as vaccination rates continue to rise, even more freedoms are less than two weeks away. (AAP Image/James Ross)
Australia

Sales data from one of Australia’s big four banks showed Melburnians spent more than $350 million in the first three days of lockdown’s end as the state emerges from the world’s longest lockdown.

According to data compiled by the National Australia Bank (NAB), eftpos terminal use in Melbourne increased 20 percent on Friday, Saturday and Sunday compared to the previous weekend, reported The Age.

Beauty salons and barbers experienced a 2340 percent increase in eftpos use, which Andrew Irvine, NAB’s chief executive, described as “mindboggling.”

Further, the bank recorded $76 million in sales in Melbourne—and $114 million for the whole state—between Oct. 22 and Oct. 24. In NSW, spending jumped 13-15 percent as the state emerged from lockdown, reported The Australian.

“We expect to see real strength. You can look at Sydney and NSW, and the numbers there are really strong over the last couple of weeks. There’s real staying power to this.”

The chief executives from the remaining three banks have also expressed optimism as Victorians are forecasted to spend $1 billion over the coming weeks.

Furthermore, a forecast buffer of $230 billion in extra savings across the nation—11.5 percent of GDP—is expected by the end of the year. ANZ Chief Executive Shayne Elliott said the cash buffer did not have “a lot of debt” in the business sector—as businesses mostly avoided borrowing to survive.

“And with the fiscal policy still in expansionary settings, there are strong reasons to look forward to a brighter future,” Commonwealth Bank boss Matt Comyn told The Weekend Australian.

National Australia Bank CEO Ross McEwan said that the reopening of NSW and Victoria was the “booster shot” the nation needed, and he is “increasingly confident” that the worst of the COVID-19 economic impact was “behind us.”

“Australians have shown incredible resilience in a difficult year, and they are ready to embrace a return to freedoms. Jab take-up is reaching critical national thresholds, which means we no longer need to rely on disruptive, widespread lockdowns to manage the virus,” McEwan said.

However, some things have “fundamentally changed forever,” Elliott said, with workplaces having moved towards digital and online workspaces.

“There will be great opportunities for some and ongoing challenges for others,” he said.

“The CBD, for example, is unlikely to return to full occupancy.

Elliot added that the bringing forward of tax cuts, boosting of investment incentives, and fast-tracking of infrastructure spend “has created good momentum,” and Australia’s economic recovery needs to be business-led.

“There’s also more that can be done to remove barriers facing small businesses, such as removal of red tape and assistance to implement new technologies.

“By the middle of next year, the Australian economy will be back to pre-pandemic levels—agricultural and manufacturing businesses will continue to experience very strong conditions, and new jobs will be created, pushing unemployment down towards 4 percent by end 2022.”

This follows reports that Victoria’s economy lost over $700 million (US$508 million) per week since the start of the lockdown.

Victoria is set to reach its full vaccinated target of 80 percent ahead of schedule, with restrictions easing further from 6 p.m. on Oct. 29. Further restrictions—including the scrapping of venue caps and density quotients—are set to ease once 90 percent of Victorians over age 12 years old are fully vaccinated, which is forecasted on or around Nov. 24.