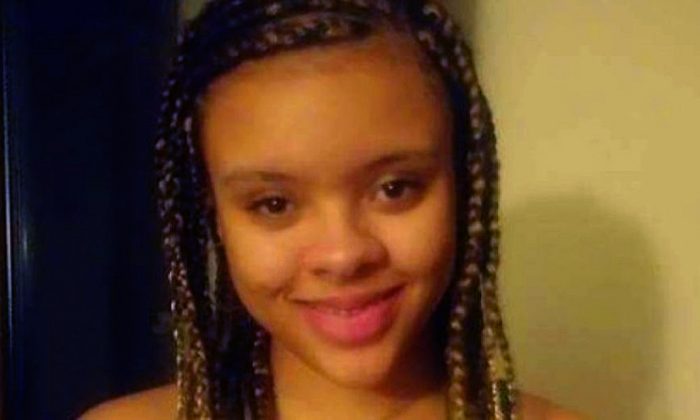 Armoni Chambers was missing for six weeks before a network of online activists found her and helped her get home. (Milwaukee Police Department)
US News

A Milwaukee teenager who was lured to Chicago via social media and forced into the sex trade has returned home, thanks to the efforts of her mother and a group of social activists.

The Milwaukee Police Department suggested that the teen might be working as a prostitute.

When, after a month, the police had made no progress toward finding her daughter, Bruno contacted well-known Milwaukee social activist Tory Lowe and a trio of Chicago-area online activists. Lowe reached out to his nearly 50,000 followers.

The combined reach of all four social-media networks led to tips coming in. In less than a week Armoni was located, taken to a hospital for an examination, and was back home with her mother.

Bonnie Bruno is understandably upset with law enforcement. “They really dropped the ball on this one,” she told the Journal-Sentinel.

Fooled Into Leaving, Forced Into Prostitution

Armoni left home at the urging of a stranger she met online, someone who promised her whatever it took to get this teenage girl to travel to another city.

Armoni caught a Greyhound to Chicago, a 90-mile ride to an unknown city, where she would be dependent on someone she had never met in real life.

As happens too often, that person was a pimp, and Armoni was forced into the sex trade.

No one knows how many young runaways end up on this path—nor how many never get off it. Armoni was a lucky exception.

She had a few things going for her. For one thing, she was caught on a surveillance video at the bus station. For another, she got free long enough to make a single phone call.

Most important, her mother absolutely refused to accept that her daughter was gone forever.

Dogged Devotion to Her Daughter

Bonnie Bruno called the Milwaukee Police Department when her daughter didn’t come home. She said she didn’t find the police to be very helpful.

The police suggested that Armoni might be in the neighborhoods near North 29th Street and West Lisbon Avenue, or possibly on West Lincoln Avenue—areas where prostitution is rampant.

When she visited those areas, she saw a lot of very young girls walking the streets—but none of them was her daughter.

For over a month police made no progress on Armoni’s case. Her mother urged them repeatedly to upgrade her to “critical missing” and on June 18, police agreed.

“I had to fight so hard for that,” Bruno said in a June 29 interview, the Journal-Sentinel reported.

Police publicized Armoni’s disappearance and almost immediately got a tip. Someone called Bonnie Bruno and said he had seen her daughter boarding a Greyhound to Chicago three weeks earlier.

Bruno immediately went to the police. Police pulled surveillance tapes from the bus station, and it was indeed 16-year-old Armoni climbing on the bus headed out of town.

Bruno got another break. At some point after she left, Armoni had called her father from a Chicago gas station. Her father was at work when the call arrived, but eventually decided to call back the unknown outo-of-town number to see who had called.

The gas station employee he spoke with told him the address, which he gave to Bruno, who passed it on to detectives.

Later, when Bruno asked Armoni why she called her father, she said she was afraid to call her mother—she was afraid her mom would be upset because she hadn’t come home.

When she asked police what they were doing and what she could do to help, “I was told, ‘Let us do our job,’” she said.

Lowe has worked on income inequality, social justice, and racial discrimination issues in Chicago for years, and has on online following of about 50,000 people. He has used his social network to help locate missing children before—he estimates that he has helped find some 130 children, the Journal-Sentinel reported.

Lowe didn’t know much about Chicago, but he did know people who did. Lowe reached out to a trio of Chicago-area activists—Vera Giles Norris, Martin G. Johnson, and Natorah El—and with their help, spread the word that there was a missing teen in need of help.

Almost immediately they got results. A cashier from a Chicago Family Dollar store recalled seeing Armoni and contacted the activists on June 25. When Lowe and the others showed up the next day, they were able to identify Armoni from the store’s security tapes.

Bonnie Bruno contacted both the Milwaukee and the Chicago police departments with this latest news. Chicago said it was Milwaukee’s case.

Another tip, of sorts, came on June 27—but it was not pleasant news.

Someone posted live video on Facebook of an unidentified man forcibly molesting young Armoni in the backyard of some building in Chicago. Armoni appeared semi-responsive, as in on drugs.

“The online community was in full effect after that went live,” Lowe told the Journal-Sentinel. “It was only a matter of time before she was found.”

In fact, the Chicago activists located Armoni that same day. They called the police, who collected Armoni and brought her to a hospital for evaluation.

By Thursday, June 28, Armoni was back in her Milwaukee home with her mother.

“When we jumped in the car, we didn’t know what was going to happen,” he said. “The fact we were able to bring her home and she’s with her mom—I can’t even. Words can’t explain it.”

Bonnie Bruno is overjoyed to have her daughter home safe, and heartbroken, knowing what Armoni had to endure.

Bonnie Bruno decided that since her daughter’s story and photos had already been all over social media, she might as well use the publicity to do some more good.

Bruno wants other parents to know what happened to Armoni, and to know that there are many options to find missing children.

A committed parent working with dedicated social activists have resources the police cannot bring to bear.

Bruno is deeply grateful to everyone who shared her daughter’s story on Facebook and other sites. She knows that without all that help, her daughter might well still be on the streets of Chicago.

She wants other parents to know the resources are out there.

“My message for any parent who has a missing child is, don’t give up.”