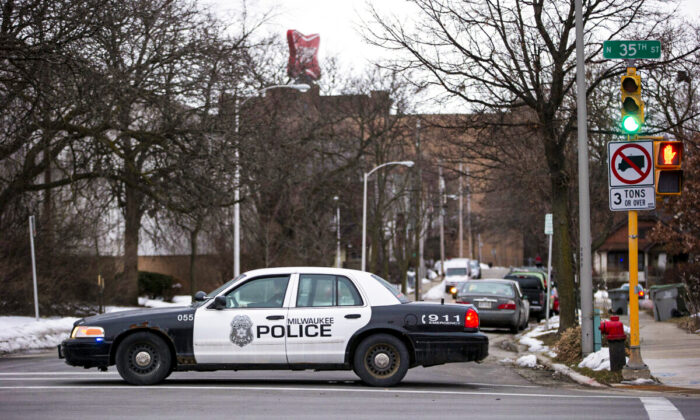 Milwaukee police work the scene of a shooting in Milwaukee, Wisconsin, on February 26, 2020.(Nuccio DiNuzzo/Getty Images)
US News

With two murders recorded on Dec. 13, the city of Milwaukee set a new annual record with 192 homicides, a 98-percent increase in just two years.

It is the second straight year of record murders in Wisconsin’s largest city.

Milwaukee joins a dozen other major urban centers with record-high murders in 2021.

Chicago, the nation’s third-largest city, leads the nation with 739 murders through Nov. 30, according to an analysis compiled by ABC News. Chicago’s homicide record, 974, was set in 1970.

Milwaukee recorded 190 murders in 2020, more than double the 97 murders police investigated in 2019, according to official figures.

The city accounted for 63 percent of Wisconsin’s 304 murders in 2020, according to Department of Justice statistics.

In 2019, Milwaukee made up 52 percent of the state’s homicides. The Wisconsin homicide rate of 5.3 per 100,000 population ranks 28th nationally, according to the FBI.

Milwaukee Mayor Tom Barrett said the COVID-19 pandemic could be a factor.

“There’s no question that we’re seeing more violence in the city of Milwaukee … and across the nation,” Barrett told reporters. “It’s very, very, very challenging.

“Is there a correlation? I don’t know,” he said.

“I’m sure that there are many [who] are studying this, but I think it is striking that the two years where we have seen the highest number of homicides in the history of this community are the two years when we have the pandemic.

News of the record homicide tally is set against the backdrop of a debate over the cash bail policies of Milwaukee County District Attorney John Chisholm.

His office requested the $1,000 cash bail that allowed career criminal Darrell E. Brooks Jr. to get out of jail and two days later allegedly plow his sport utility vehicle into participants at the Waukesha Christmas Parade, killing six and injuring 61.

Brooks is being held on $5 million bail for six counts of first-degree intentional homicide in the Nov. 21 massacre.

Chisholm said in retrospect, the $1,000 bail was “inappropriately low”—an amount recommended by an inexperienced prosecutor.

Critics contend low cash bail and non prosecution are hallmarks of Chisholm’s 15-year tenure as district attorney. Chisholm’s office has not responded to requests from The Epoch Times for comment.

A number of recent Milwaukee murders were allegedly committed by offenders out on bail in other felony cases.

Other GOP lawmakers decry what they see as Chisholm’s soft-on-crime stance for requesting low bail, or deciding not to prosecute criminal referrals from police.

“As the Milwaukee crime problem continues to spiral out of control, local reporting on the most notorious repeat offenders features many of the same elements,” said Sen. Duey Stroebel (R-Saukville).

“Perhaps the most common is a quote from a Milwaukee police officer about how they’ve arrested the same individual several times but said individual ‘keeps making bail,’” Stroebel said in a statement.

“Of course it’s not difficult to ‘keep making bail’ when the local DA and courts set the amount so low as to almost guarantee offenders of all stripes will be released back on to the streets and given free rein to prey on the communities of southeast Wisconsin.”

Democrat Attorney General Josh Kaul does not believe Chisholm should be removed from office, telling the Milwaukee Journal Sentinel, “We’ve got a system where our DAs are elected in Wisconsin and that’s a decision for voters to make.”