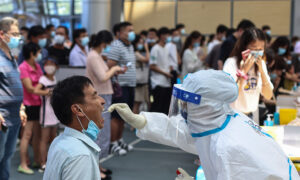 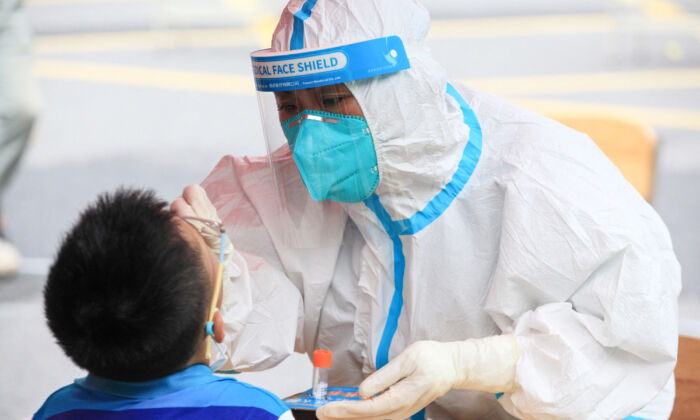 A child receives a nucleic acid test for the Covid-19 coronavirus in Nanjing, in eastern Jiangsu province on July 29, 2021.(STR/AFP via Getty Images)
INSIDE CHINA

Millions Under Lockdown as China Attempts to Control Delta Outbreak

Millions of people are currently confined to their homes in China as the regime races to contain its largest COVID-19 outbreak in months, driven by the spread of the Delta variant. The surge has caused concerns about the efficacy of Chinese vaccines against the highly infectious strain.

Chinese health authorities have blamed the Delta variant for a rise in infections spanning 14 provinces and including Beijing. The recent outbreak of COVID-19, the disease caused by the CCP virus, was first reported on July 20 in the eastern city of Nanjing, where nine airport workers were identified by routine tests.

On Aug. 2, the national health commission confirmed 43 fresh cases across the nation, pushing the total of infected numbers over 300 within 10 days. But this figure isn’t likely to reflect the true total, given the Chinese regime is known to grossly underreport its virus numbers.

The residential area where Wang lives has been under lockdown since July 28.

On Aug. 2, the Beijing authorities gave stay-at-home orders to hundreds of thousands of people in the Haidian District after a resident was found infected with the CCP virus that morning.

A resident surnamed Zhou confirmed to The Epoch Times on Aug. 2 that she was informed the residential area was locked down in the morning. She said residents are receiving nucleic acid tests, and suggested that the lockdown wouldn’t be lifted before several rounds of mass tests were completed.

Flights, trains, and buses have been canceled from areas in the capital where the CCP virus has been found, locking out tourists during the peak summer holiday travel season, despite the vast majority of the citizens having been inoculated with Chinese vaccines.

As of Aug. 1, more than 96.98 percent of the adult population in the capital have been vaccinated with at least one dose, while the fully vaccinated rate reached 92.14 percent, Beijing’s National Health Commission said. The vaccination of those aged 12 to 17 began on Aug. 1.

“Being vaccinated doesn’t mean staying in a safe box,” said Xu Hejian, the spokesperson of the Beijing authorities said at a press conference on Aug. 2.

The Chinese regime has scrambled to track people who had traveled through the Nanjing Lukou International Airport.

Nantong City, about a three-hour drive from Nanjing, has sent 16,000 people who had been to the airport since July 6 to hotel quarantine.

Local public security officials said on Aug. 2 that administrative punishments had been imposed on two people because they failed to report their travel histories, even though the two showed a negative COVID test, state-run news agency Xinhua reported.

Lin Tian (pseudonym), a local IT company owner, told The Epoch Times on July 31 that he had been in quarantine in a hotel since July 21.

“I don’t know how they know [my travel history],” he said, suggesting the authorities may trace close contacts through tracking ID cards or monitoring cellphone location.

Meanwhile, authorities in Wuhan, where the CCP virus originated in late 2019, sealed off seven residential compounds and roads, and quarantined more than 2,000 people after seven cases were reported on Aug. 2, Xinhua reported.

According to Wuhan’s National Health Commission, one person among the infected is related to a tour group who had been to the popular tourist destination of Zhangjiajie, where many of the latest cases emerged.

Zhangjiajie City, in the northwest Hunan Province, has become another focus of concern, because travelers from Nanjing were thought to have visited. Beijing health officials said the three who tested positive for the CCP virus recently had been to the city.

Zhangjiajie is now trying to track down more than 2,000 people who had attended a performance on July 22. The city has locked down all 1.5 million residents and shut all tourist attractions.

In the recently flood-stricken city of Zhengzhou, the Chinese regime has imposed travel restrictions after nearly three dozen people were reportedly infected.

Luo Ya, Gu Xiaohua, and Hong Ning contributed to this report.