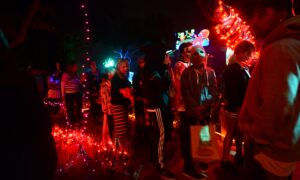 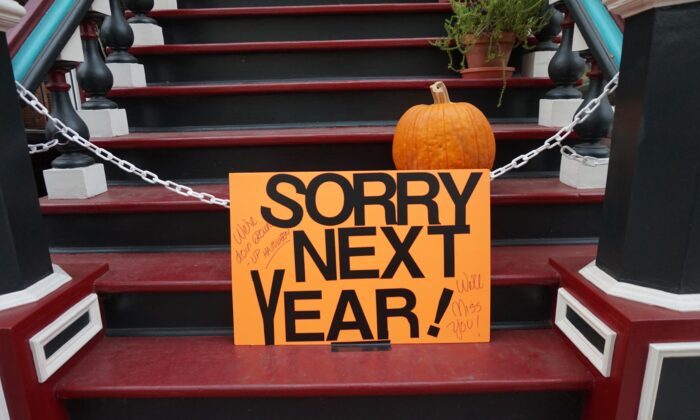 A sign reads 'Sorry next year' on steps outside a home in this file photo. Due to restrictions to slow the spread of the CCP virus, many children will not be able to participate in trick or treating this Halloween. (Ben Shan/Unsplash.com)
UK

Millions of Children Banned From Trick or Treating in England

Millions of children in England will not be able to go trick or treating because they live in Tier 3 areas where mixing of households is not allowed either indoors or in private outdoor areas.

The youngsters affected live in areas categorised as Very High alert under measures put in place to slow the spread of the CCP (Chinese Communist Party) virus.

Under the rules, the children can’t celebrate the yearly tradition where children, dressed in costumes, go from house to house asking for treats.

The government has not made an official statement on the matter, but Business Under-Secretary Nadhim Zahawi told LBC radio on Tuesday that children were banned from going trick or treating in areas where infection rates are the highest.

Zahawi said that people in Tiers 1 and 2 can participate in the tradition, but needed to still stick to the rules.

“If you are in Tier 2, you can’t socialise inside somebody’s private home, so you’d have to probably stand outside that home,” he said. “And that is the way you could enjoy trick or treating.”

He also said that the rule of six still applies in Tier 1 “so if you go and knock on someone’s door you can’t go in if there’s more than six people”.

Zahawi’s comments come as Warrington and parts of Nottinghamshire go into Tier 3 this week.

Lancashire police issued a statement urging residents not to participate in trick or treating.

“We’ll be out and very visible in the run up to Halloween and on the night itself, making sure people are safe and helping them stick to the rules,” police said.

“We’d recommend people don’t put communal sweets outside for children—the risk is they end up as germ magnets.”

National older persons’ charity Age UK has also issued tips for trick or treaters who are allowed to participate and might be approaching the doors of older citizens.

It said to “look for a pumpkin outside the house” to gauge whether the occupant is happy to see trick or treaters, not to ring or knock persistently, and to move on if they don’t get an answer.