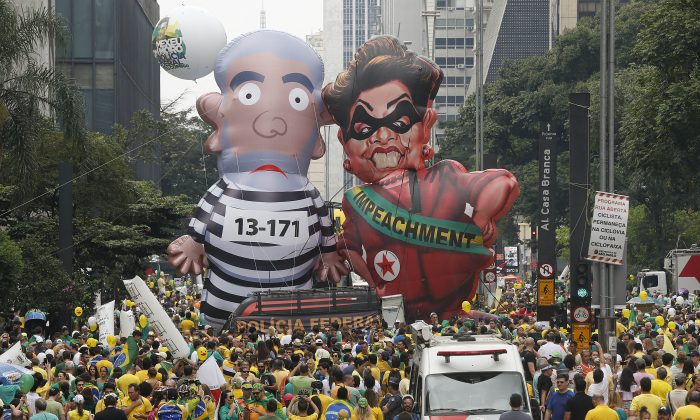 RIO DE JANEIRO—A day after huge protest rallies urged the ouster of President Dilma Rousseff, her chief of staff on Monday acknowledged popular discontent with Brazil’s political class but said the flagging economy was the main reason behind the turnout.

Jaques Wagner’s comments came at a news conference after Rousseff met with her closest advisers early Monday as the government sought to explain what leading newspapers called the biggest political demonstration in Brazilian history.

Analysts agreed that the dissatisfaction demonstrated by the protests complicates Rousseff’s already difficult position. She’s fighting impeachment proceedings in Congress amid the worst recession in decades and a sprawling corruption investigation closing in on key figures in her Workers’ Party.

“The fact is that Sunday can be seen as a watershed moment, which frightens the government (and) pressures Congress,” Folha said in an editorial Monday. “Surprised by the strong turnout on Sunday, the government has been put on alert that it needs to act quickly” to avoid Rousseff’s impeachment.

Wagner said the government was interpreting the Sunday’s high turnout as a sign that “the people are sick and tired of the political class.”

But while “everything contributed” to pushing people onto the streets, “the main thing is people’s lives, meaning the economy,” he said.

“If everything is great, citizens aren’t even looking,” he was quoted as saying by Globo television network’s G1 Internet portal.

Although Rousseff has seen her approval ratings dip into the single digits, she has ruled out resigning, saying last week that it was objectionable to demand the resignation of an elected president without concrete evidence the leader had violated the constitution.

The government hopes that pro-government demonstrations scheduled for Friday will help shore up Rousseff’s position.

But, in a statement Monday, the U.S.-based Eurasia Group political and economic risk consulting firm estimated there is 65 percent probability that Rousseff will not serve out her term, which ends in 2018.

“We now think an impeachment vote will occur by May, and Rousseff will not survive it,” the statement said.

“There is a situation of ungovernability, and that gives more room to a narrative that her removal is inevitable. But it isn’t that simple. There will be protests in her defense on Friday and she still needs a little more than 170 votes out of 513 deputies to survive,” he told The Associated Press.

Eurasia Group’s statement said Sunday’s turnout was fanned by the “ballooning” corruption probe at the state-run energy company Petrobras and the “highly polarized environment” after Rousseff’s predecessor and mentor, former President Luiz Inacio Lula da Silva, was taken to a Sao Paulo police station for questioning in the Petrobras case.

Among other issues, federal investigators say they are trying to determine if Silva sold his influence in the current administration in exchange for speeches and donations to his nonprofit foundation, Instituto Lula.

The more than 100-page transcript of Silva’s questioning was released Monday. In it, Silva denies having asked for money for his foundation from any of the construction companies ensnared in the Petrobras scandal but acknowledged that his aides may have made such requests. Silva also explicitly states his intention of running for office again in 2018.

Three days before Sunday’s protests, Sao Paulo state prosecutors requested Silva’s arrest in a separate case. They accuse the former president of money laundering for allegedly being the secret owner of a beachfront flat in the city of Guaruja. But the state judge decided Monday it was not up to her to rule on the matter since money laundering is a federal crime in Brazil. She sent the case to federal judge Sergio Moro in the southern city of Curitiba who heads the “Car Wash” investigation into corruption at Petrobras.

Hailed as a national hero at Sunday’s demonstrations, Moro was already looking into the beachfront flat case as part of the Petrobras probe.

The governing Workers’ Party, meanwhile, is pressing for Silva to accept a Cabinet post in Rousseff’s government. Rousseff has said she would be “extremely proud” to have Silva, who supporters say could prove crucial to helping her remain afloat.

Critics suggest the offer is aimed at shielding the once-wildly popular Silva from imprisonment. Under Brazilian law, only the Supreme Court can authorize the investigation, imprisonment and trial of Cabinet members.

Silva has repeatedly insisted he has not committed any wrongdoing and suggests the probes are part of a political smear campaign.

Sunday’s demonstrations, overwhelmingly comprised of the white, older middle-class people who have railed against Rousseff for years, may have weakened the government but they don’t seem to have strengthened the opposition. The crowd in Sao Paulo booed opposition politician Aecio Neves, who narrowly lost to Rousseff in the 2014 presidential run-off.