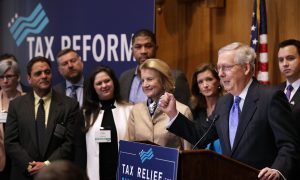 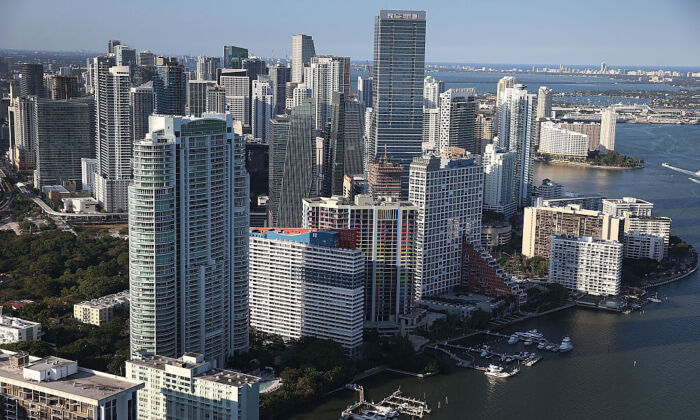 WASHINGTON—Millions of people every year move their families, businesses, and incomes to states that are economically more attractive.

High migration of people and businesses from high tax states to low-tax ones in recent years highlights the strong relationship between tax policy and economic health of a state, according to a report titled “Rich States, Poor States,” published by the American Legislative Exchange Council (ALEC).

Every single day in America 1,000 people are leaving a high tax state and moving to a low tax state, Stephen Moore, an economist at the Heritage Foundation and author of the report said at an event hosted by the Foundation.

“And this is a migration of 4 to 5 million people every year that are moving to states that have more economic freedom. It is a big deal.”

Moore added that this is a particularly big issue for states like New York, New Jersey, Connecticut, and Illinois that have high taxes and spending.

New York, for example, has one of the highest state and local tax rates, with the combined top rate of 12.7 percent for individuals and 17.2 percent for corporations. On net, New York lost more than 1.3 million residents over the past decade to more economically competitive states, stated the report.

States that spend less and tax less tend to experience higher population and economic growth. Florida had 1.1 million more people come into the state than left the state over the past decade. The Sunshine State levies no taxes on personal income and has a top combined rate of 5.5 percent for corporations.

Florida had nearly 300 percent more jobs in 2017 than 1970, and exploded in population. In late 2014, Florida overtook New York as the nation’s third most populous state, behind California and Texas. Over 50 years ago, New York was the most populous state in the United States.

The report ranks states according to their economic performance, which is based on three metrics: growth in gross state product, domestic migration, and growth in non-farm employment.

According to the economic outlook ranking, Utah topped the “rich states” list in 2018 for the 11th year in a row.

The cumulative economic growth of Utah was 48 percent between 2006 and 2016. And in terms of population, Utah was also one of the fastest growing states in the country.

The state has a single personal income tax, with a flat rate of 5 percent, which was adopted nearly 10 years ago. This is one of the factors that make Utah very competitive, according to Jonathan Williams, chief economist at the ALEC and one of the authors of the report.

In addition, Utah has reformed its pension system. In terms of unfunded liabilities, the state has got ahead of the curve and moved towards “a defined contribution private sector model” a few years ago and has seen massive savings for taxpayers as a result, Williams said at the Heritage Foundation event.

The state has also adopted an innovative approach to keeping property taxes limited.

“Utah has gotten to the heart of the issue, which is stopping the stealth property tax increases through the assessment process,” Williams said.

And according to the report, top poor states in 2018 were New York, Vermont, Illinois, California, and New Jersey.

According to Williams, the continued migration to economically attractive states have political ramifications as well.

“When you look at these population flows, they have obviously a direct relationship with how states are winning or losing in terms of political representation in the U.S. House,” he said.

“And biggest winners of 2020 are likely to be Texas and Florida,” he noted, adding that these states may win at least two new House seats in 2020. And biggest losers will likely be Illinois and New York, he said, with each losing one or 2 seats, at least.