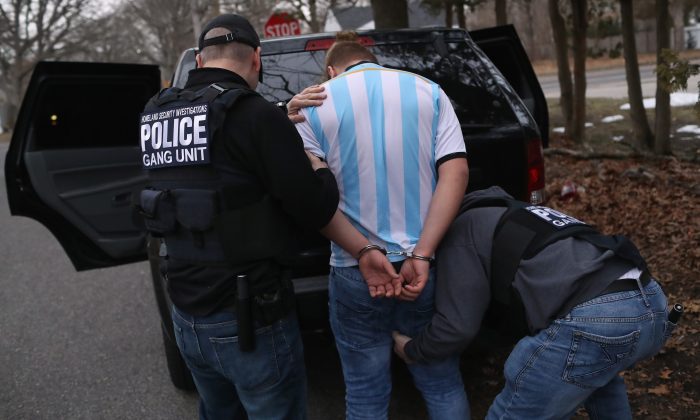 Illegal immigrants already slated for deportation remain for years in the country before they are finally removed, government data shows.

There were more than one million illegal aliens with final orders of removal in the country as of June 2, 2018, according to data obtained through a freedom of information request from the Immigration Reform Law Institute (IRLI), an anti-mass immigration advocacy law firm.

While there are 11 million and perhaps many more illegal immigrants in the country, Immigration and Customs Enforcement (ICE) only arrests and deports small percentage of them—less than 260,000 people in fiscal 2018 (pdf).

This means even when a person is ordered to be deported, it would still take ICE about four years, on average to actually remove him or her from the United States.

In addition, there are more than 1.1 million people who have a pending final order, Conservative Review reported, meaning they’ve been slated for deportation but have likely appealed their case to the Bureau of Immigration Appeals (BIA), the appellate body of the immigration court system.

About two thirds of those with final or pending removal orders hail from four countries—El Salvador, Guatemala, Honduras, and Mexico.

The first three countries in the Central American triangle have very much become the leading source of illegal immigration. Around one million of their citizens have been apprehended by Border Patrol, and caught trying to enter the country illegally since 2013 (pdf).

IRLI only obtained data up to June 2 before the latest increase in illegal border crossings, which have nearly doubled in the first five months of fiscal 2019 compared to the same period a year earlier, based on Customs and Border Protection apprehension data.

Illegal border crossings are on-pace to reach nearly one million this year. In February alone, 66,000 people crossed the border illegally, according to border patrol. An additional 10,000 were detained after presenting at a port of entry without proper paperwork.

“Instead of taking on more aliens from caravans, our country should expedite the removal of those who have already received due process and been given removal orders,” IRLI Executive Director and General Counsel Dale Wilcox said in a release dated March 12.

More than a million annually is NOT an emergency?https://t.co/xYBra9cgKP

About two thirds of those removed by ICE in 2018 were either convicted criminals or had pending criminal charges against them. ICE data indicated the nearly 140,000 criminal aliens it arrested in 2018 most often faced or were convicted of less serious crimes, such as driving under influence, though a significant portion were violent criminals. Over 50,000 had charges or convictions of assault, over 5,000 of sexual assault, and over 2,000 of homicide (pdf).

ICE could discourage further influx across the southern border, if it focused resources on clearing the backlog of people slated for deportation, according to former ICE Associate Director in the Obama administration Thomas Homan.

“ICE should do a nationwide operation to locate, arrest, and remove those who have entered the United States illegally, including family units, who have had their due process, lost their cases, and have been ordered removed by a judge,” he said. “If a final order issued by a federal judge doesn’t mean anything and it isn’t executed, then there is no integrity in the entire system.”

Rolando lives in Texas, and he supports the wall to stop the flow of illegal immigrants into our country. pic.twitter.com/aQWy6HmX36

Update: An attribution has been added for the increase in illegal border crossings.