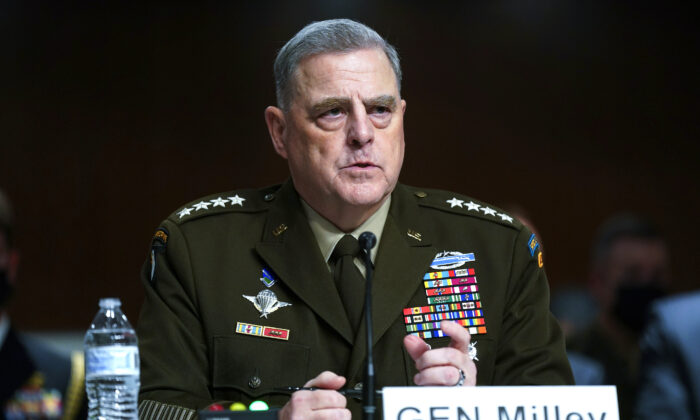 Chairman of the Joint Chiefs of Staff Gen. Mark Milley speaks during a Senate Armed Services Committee hearing on the conclusion of military operations in Afghanistan and plans for future counterterrorism operations, on Capitol Hill in Washington on Sept. 28, 2021. (Patrick Semansky/Pool via AP Photo)
Russia-Ukraine War

Milley: Ukraine War Will Last Much Longer Than Anticipated

The top U.S. general acknowledged that he believes the Russia-Ukraine war will last much longer than previously anticipated and will develop into a “protracted conflict.”

“Even though we’re a month-plus into the war, there is much of the ground war left in Ukraine,” Chairman of the Joint Chiefs of Staff Gen. Mark A. Milley told a House Armed Services hearing Tuesday when asked by Rep. Bill Keating (D-Mass.). “But I do think this is a very protracted conflict, and I think it’s at least measured in years. I don’t know about a decade, but at least years for sure.”

Members of Congress also pressed Milley on whether the United States could have taken any action ahead of Russia’s invasion on Feb. 24. The general suggested that the only way to deter Russia would have been to send American troops into Ukraine, which isn’t a member of NATO.

In early February, before Russia sent its forces across the border into Ukraine, Milley told House lawmakers that Moscow could take Kyiv, the capital city, in only “72 hours,” according to reports. The Epoch Times has contacted the Department of Defense for comment.

“Candidly, short of the commitment of U.S. forces into Ukraine proper, I am not sure he was deterrable,” Milley told lawmakers, referring to Russian President Vladimir Putin.

“This has been a long-term objective of his that goes back years,” he continued to say. “I think the idea of deterring Putin from invading Ukraine—deterring him by the United States—would have required the use of U.S. military forces and would have risked armed conflict with Russia, which I wouldn’t advise.”

Milley added that economic sanctions “have a very poor track record of deterring aggression,” but he added they have succeeded in imposing significant costs against Moscow.

Since the start of the invasion, the United States, the UK, and the E.U. have hammered Russia’s government, banking, and financial sectors, and top officials as well as their family members with sanctions in response to the conflict.

Milley also answered questions about what weapons systems are being provided to Ukraine’s military, asking whether more weapons and equipment will be provided. Top Biden administration and Pentagon officials have said the United States will not send its forces to Ukraine as it would risk a broader conflict with Russia, a nuclear-armed state.