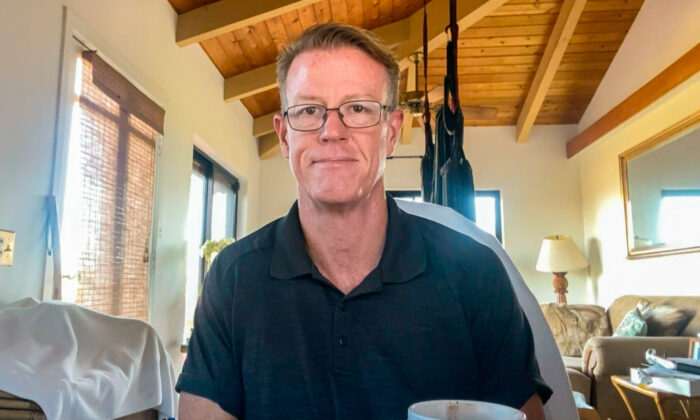 Edward Dowd, a former Wall Street analyst, BlackRock portfolio manager, and author of the upcoming book “‘Cause Unknown’: The Epidemic of Sudden Deaths in 2021 & 2022.” (The Epoch Times)
US News

Excess deaths after government’s vaccine mandates must be talked about: author Edward Dowd
By Jan Jekielek

Edward Dowd, a former portfolio manager for BlackRock and the author of the upcoming book “‘Cause Unknown’: The Epidemic of Sudden Deaths in 2021 & 2022,” has been analyzing data related to all-cause mortality since March 2021.

Dowd is familiar with predicting trends and observing patterns, and became interested in studying CDC data after he heard many anecdotal accounts of vaccine injury. He found a monumental spike in sudden deaths occurring in the fall of 2021 to early 2022 in the working age cohort, which corresponded to the Biden administration’s vaccine mandates for federal and corporate employees.

“The age cohort from 25 to 44, which we call the millennials, experienced an 84 percent rise of excess mortality into the fall of 2021—August, September, October—and the rate of change was just dramatic,” Dowd told EpochTV’s American Thought Leaders program during an interview that will premiere Sept. 6. That “represented about 61,000 Americans who perished from March 2021 to February 2022.”

To help Dowd better analyze the CDC data, a former top-ranked insurance analyst on Wall Street named Josh Sterling took the CDC data for all-cause mortality, which was not divided by age group, and separated the numbers by age cohort. He first created a baseline of normal death rates, from 2015 to 2019. Dowd said this was to get a more accurate picture of who died during the height of the vaccine mandates.

In early 2022, Dowd and Sterling got other sources corroborating their findings about the spike in deaths for the working age cohort.

In January 2022, OneAmerica CEO Scott Davison said during a press call that, based on their life insurance claim data, “in the second half of 2021, all-cause mortality among, especially working age members, had rose to a stunning 40 percent,” said Dowd. “And his company, which is a $100 billion insurance company, experienced just this incredible rise in deaths and claims.”

The significance of this rise in mortality, he explained, is that this company provides group life insurance, which handles insurance for corporations, not individuals.

“Forty percent is like a war. It’s not something that happens in the normal course of business,” said Dowd. Before the COVID-19 vaccine mandates, the deaths were primarily in the older age cohort, but after the vaccine rollouts in the second half of 2021, deaths became inflated in the younger, working-age cohort, he added.

Dowd has his own hunch about this sudden increase aligning with the vaccine mandates for big businesses, corporations, as well as federal agencies, but said that even if others disagree, he wants to be able to discuss, debate, and study the data in depth to come to a fair and rational conclusion about this spike in deaths.

In addition to OneAmerica, the Society of Actuaries published a data set also showing very similar results to what Dowd and Sterling found regarding death rates in working-age cohorts.

“They did what’s called a Group Life survey, where they rolled out about 80 percent of the revenues of the industry and looked at some all-cause mortality data. [I was pointed] to table 5.7, which is on page 23 of this report,” said Dowd.

Dowd said the fact that they used different data sets—Dowd used CDC all-cause mortality numbers and the insurance company used their group life claim numbers—but got similar death spikes, validates his hypothesis of vaccines being the cause of death.

“But we need more data from the government, which they’re not providing. And if they did, the link would be there, I think, 100 percent,” said Dowd.

While Dowd attributes the spike in deaths to the vaccine mandates, the Society of Actuaries attributes the deaths to other factors, including long COVID, suicides, drug overdoses, and missing medical screenings due to lockdowns.

“I know there was an event that occurred in the third quarter: that was corporate mandates and executive order mandate by the Biden administration for companies with over 100 employees. And what we saw was a rate of change, a slope of the line into the 84 percent, into the third quarter that was so alarmingly fast and large, it went from like 50 percent to 84 percent in three months,” said Dowd.

Dowd also argues that the insurance company’s conclusion does not make sense because corporate employees tend to be healthier people, with fewer drug addiction and suicide rates.

The problem goes well beyond the effects of the COVID vaccines, according to Dowd. He sees a deep-seated corruption in the public health institutions and in medicine, which he said has crept in over a long period of time but needs to be challenged. That is why he and three other coauthors wrote the Malone Doctrine.

Through Dowd’s participation in anti-mandate rallies in Hawaii, he met Dr. Robert Malone. Dowd informed Malone that he was looking at death rates by monitoring insurance companies’ and funeral home data to see if there were any trends that raise concern.

Dowd said Dr. Malone represents integrity in the sciences and that is why the document is named after him. Malone is a scientist, physician, and inventor of mRNA vaccines, and has been at the forefront of the fight for COVID data transparency and vaccine integrity.

“This was a gift to Dr. Malone, and Dr. Malone is going to make it a gift to the world. And hopefully, over time, this gets adopted,” said Dowd.

Dowd said he is passionate about finding the truth and having an open debate about these vaccines because people are clearly being harmed by the vaccines and he is concerned for the future of the country.

“We think that over time, not only will Josh and I be proven, right, it’s going to be devastating for a lot of institutions, and the implications for our country are going to be very, very dire,” said Dowd.

“This is a crisis of epic proportions that no one seems to be talking about. At the very least, it should be acknowledged, and there should be investigations all over the country to try to figure out the silent killer.”