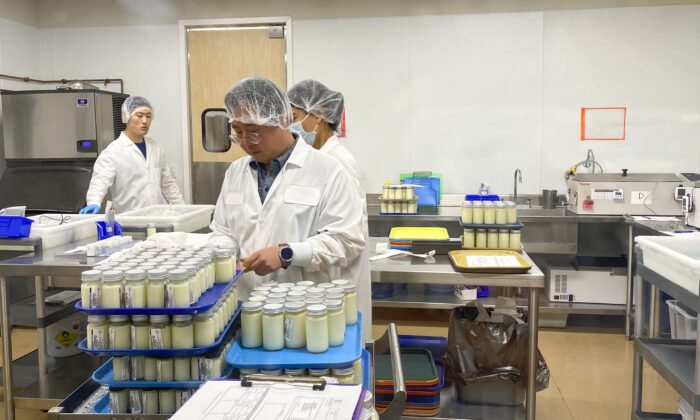 SANTA CLARA, Calif.—Amid the baby formula shortage, mothers are looking for other ways to make up for the lack of milk. Some are turning to milk banks for help.

Mothers’ Milk Bank in San Jose was started in 1974 to feed premature infants. It’s the oldest operating milk bank in North America. The nonprofit is part of an organization called the Human Milk Banking Association of North America, which establishes the standard for milk banks.

“The donors go through an extensive screening, similar to blood donation, and they get tested for infectious disease,” Jonathan Bautista, executive director of Mothers’ Milk Bank, told NTD Television. “The other thing that we do is we get consent from the obstetrician, the mom’s physician, and the baby’s physician, so that the mom is healthy and the baby’s healthy, and then she’s approved to donate her milk.”

The donor’s milk is shipped or dropped off to get treated and processed for other babies.

They mix the milk from three to five donors into bottles to homogenize nutrients.

In the pasteurization room, the bottles are placed into a water bath and heated to 62.5 degrees Celsius. They remain in the water bath for 30 minutes.

“The bottles are submerged and that ensures that the temperature of the water bath envelops the entirety of the bottle,” Bautista said.

Then the bottles are transferred into an ice bath to quickly cool them down. They’re labeled, sealed, and put in a freezer.

During shipping, they’re packed with dry ice, so the milk stays frozen.

When treated this way, pasteurized human milk has a shelf life of 12 months.

Bautista said they usually see milk shortages during the holidays and the New Year. Shipping delays and weather conditions contribute to the shortage.

But they aren’t short now.

“We’re actually seeing a big increase in interest of donor milk, in light of the formula shortages, and we’re also seeing an increase in the women who want to donate milk also,” Bautista said. “So it’s good that we’re seeing that interest in donating milk, and we want to make sure that our inventory keeps up with the increase in demand that we’re seeing.”

During shortages, the milk bank prioritizes hospitals over outpatients. About 60 percent of their milk goes to hospitals.

Donor milk is used mostly for medical reasons, but mothers may also place an order if their own milk isn’t available, is insufficient, or a baby’s illness would benefit from donor milk.

Most of the milk bank’s donors are from California, but donations also arrive from across the country.

On June 13, a shipment of 95,000 tins of baby formula arrived at the Los Angeles International Airport from Melbourne, Australia.

According to the California governor’s office, it will hit West Coast shelves on June 20.