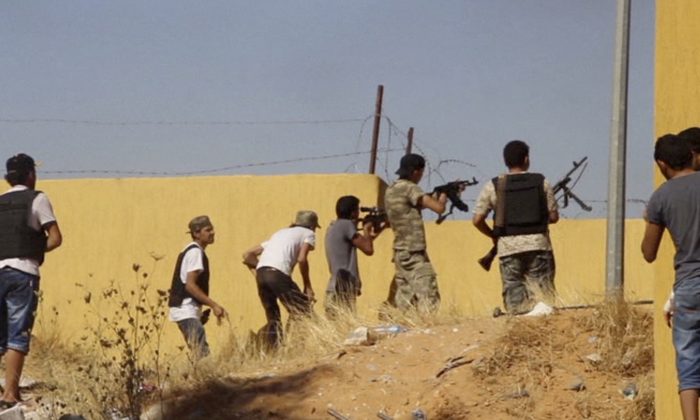 In this Saturday, July 26, 2014 frame grab from video obtained from a freelance journalist traveling with the Misarata brigade, fighters from the Islamist Misarata brigade fire towards Tripoli airport in an attempt to wrest control from a powerful rival militia, in Tripoli, Libya. The battle for control of Tripoli's international airport began two weeks ago when Islamist-led militias - mostly from the western city of Misrata - launched a surprise assault on the airport, under control of rival militias from the western mountain town of Zintan. Heavy clashes in the country’s restive east between Libyan soldiers loyal to a renegade general and Islamist-led militias killed dozens of people including civilians, health officials said Sunday. On Saturday, the U.S. evacuated its diplomats in Tripoli to neighboring Tunisia and shut its embassy. (AP Photo/AP video)
Africa

TRIPOLI, Libya—Islamist-allied militias from the western city of Misrata clashed with an eastern militia that holds a major oil terminal on Saturday, in violence that killed at least two people, Libyan officials said.

The officials say the Tripoli-based government — backed by Misrata militias and Islamist factions — ordered its forces to “liberate” the Sidra terminal.

The officials said that aircraft affiliated to Omar al-Hassi’s rival government carried airstrikes targeting an air base in the central city of Sirte but caused no major casualties.

An aide to al-Hassi, the Tripoli-based prime minister, said that the assault on Sidra is the beginning of a wider offensive called “Sunrise.”

Al-Hassi’s allied militias launched an earlier offensive called “Libya Dawn” in Tripoli to take control of the capital and its airport. The campaign left much of the airport devastated, forced hundreds of thousands to evacuate and prompted foreign missions to shut down their embassies.

That terminal is held by the militia of eastern separatist Ibrahim Jedran. Jedran’s forces are known to be loyal to Libya’s elected government based in the eastern city of Tobruk.

All officials spoke on condition of anonymity because they were not authorized to speak to journalists.

Saturday’s fighting is the first confrontation near Libya’s vital oil terminals. It highlights the stakes of the ongoing chaos in Libya, where rival governments, parliaments and militias fight for power.

Forces of the elected government have been battling Islamist militias, including the extremist Ansar al-Shariah group, over control of the eastern city of Benghazi since Oct. 15.