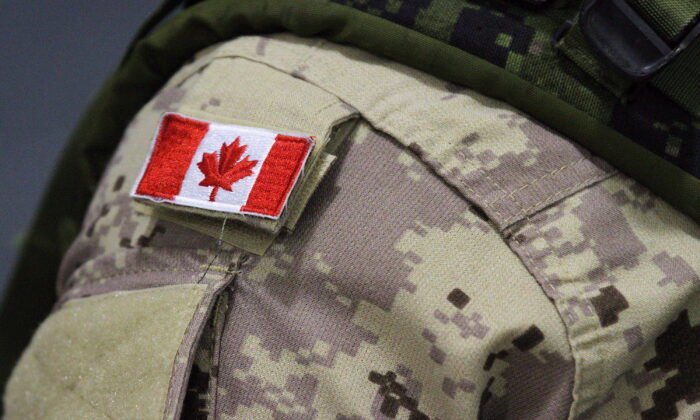 A Canadian flag patch is shown on a soldier's shoulder in Trenton, Ont., on Oct. 16, 2014. (The Canadian Press/Lars Hagberg)
Canada

OTTAWA—The military’s top prosecutor and police officer say they will transfer sexual misconduct cases to civilian authorities, and that they will be reaching out to victims affected by the change.

In a statement, Col. Dylan Kerr, the director of military prosecutions, and Brig.-Gen. Simon Trudeau, the Canadian Forces Provost Marshal, defend the professionalism, dedication and competence of the military prosecutors and police officers under their command.

Yet they also acknowledge the current “crisis of confidence” in the military justice system, especially when it comes to allegations of sexual misconduct.

They say that is why they are acting on retired Supreme Court justice Louise Arbour’s call to transfer responsibility for investigating and prosecuting military sexual misconduct cases of a criminal nature to civilian authorities.

Trudeau and Kerr say they have already started work on such a transfer, with Trudeau developing directives for his officers and a framework that will give civilian police “precedence” over investigation of sexual assault and related criminal offences.

The two are also promising talks with civilian counterparts across the country to ensure a smooth transition, and updates to victims whose cases are affected.

“To victims, who are at the forefront of all that we do, rest assured that the military police will support you throughout any transfer process to the civilian justice system,” the statement says.

“You and anyone affected by this change will be contacted in the coming days by the military police to discuss the way forward and to answer any questions you may have.”