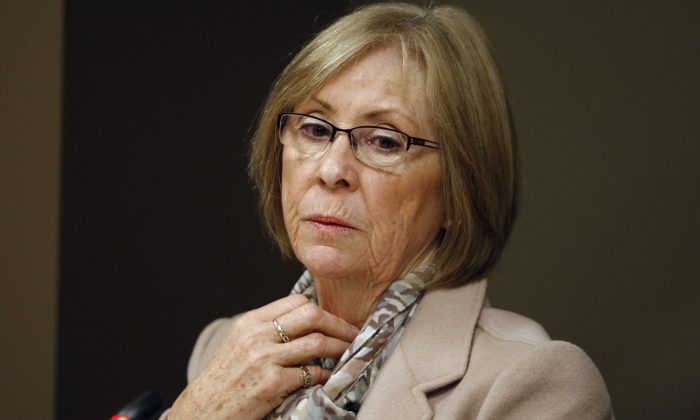 Sheila Fynes attends a Military Police Complaints Commission hearing into the suicide of her son, Cpl. Stuart Langridge, in April 2012. Fynes says the military's response to a recent series of suicides within its ranks is “cold comfort” to the families of victims. (The Canadian Press/Adrian Wyld)
Canada

OTTAWA—The Canadian military’s response to a recent series of suicides within its ranks is “cold comfort” to the families of victims, says the mother of a soldier who took his own life.

Mental illness continues to be stigmatized, despite high-profile appeals from the prime minister and the country’s defence chief for troops to come forward and deal with their problems, said Sheila Fynes, whose plight has been documented by a defence watchdog.

Months of testimony before the Military Police Complaints Commission, which examined the circumstances surrounding the 2008 death of her son, Cpl. Stuart Langridge, painted a stark picture of how his depression and substance abuse were treated as a discipline problem, rather than an illness related to his service.

Fynes said she and her husband are in regular contact with Afghan veterans, who often call looking for non-judgmental support. The sheer number of conversations convinced her that soldiers who ask for help are often treated like “losers and drunks” who had a problem before putting on a uniform.

A number of suicides have rocked the Canadian Forces over the last three months. While the circumstances of each are different, the military response has generally been that programs and services are in place, and it’s up to individuals to seek treatment.

“It’s very subtle, but the message is: ‘If they can’t step up, we can’t be responsible,’” said Fynes.

The Department of National Defence has conducted several high-profile campaigns to encourage those who might be suffering in silence, but in a recent statement, the country’s top military commander, Gen. Tom Lawson, underscored the notion of personal responsibility.

“We have an expert health-care system to support us, but in order for us to help each other it’s essential that all military personnel—like all Canadians—recognize mental health issues as they develop,” Lawson said.

“Although suicide is a national public health concern, for an organization like ours—built on leadership, built on camaraderie and built on strength—it hits us especially hard.”

In her experience, Fynes said, the military’s reflex instinct has been to blame the soldier rather than ask questions about how the individual might have lost his or her way.

“They’re always looking for ways to distance themselves from any responsibility,” she said.
National Defence was asked for comment Monday, but no one was immediately available.

Many soldiers say admitting to a mental health condition is a sure way to be ostracized and even drummed out of the military under the universality-of-service rule, which requires all members to be fit to deploy at a moment’s notice.

In the wake of recent suicides, a grassroots movement of soldiers checking up on other soldiers has taken hold, said Fynes.

The inquiry into her son’s death wrapped up in October 2012, but has yet to produce a final report. The fact that a number of soldiers have taken their lives since then has been discouraging to say the least, she added.

“I sat in Ottawa for four and-a-half-months, and really at the end of the day we listened to a bunch of people line up with stories that didn’t make sense when you put them all together,” she said.

“We did it in the hope that it would make a difference and we see the same lack of accountability and responsibility. So we feel what we did was pointless.”