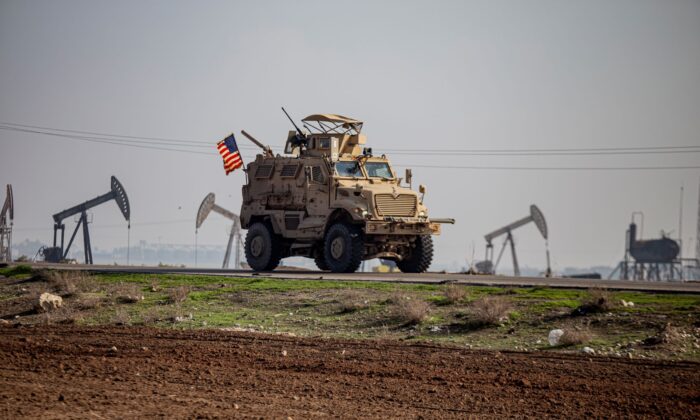 A US military vehicle on a patrol in the countryside near the town of Qamishli, Syria, on Dec. 4, 2022. (Baderkhan Ahmad/AP Photo)
By Michael Washburn

The U.S. military’s increased push for diversity and inclusion, as reflected in the far-reaching National Defense Authorization Act (NDAA) signed by President Joe Biden on Dec. 23, 2022, aims to remake the military’s culture and ethos along the same lines as left-wing policies that have been put to use at elite colleges and other areas of the private sphere, defense experts say.

While efforts to diversify the armed forces along racial and gender lines at the expense of traditional standards, aren’t new, the NDAA signals dramatically increased civilian input on and oversight of a culture once deemed to be the domain of professional soldiers, the experts told The Epoch Times.

Provisions of the NDAA that aim to boost diversity are so similar to policies enforced by private institutions, such as Harvard University, that an organization opposing the “woke” agenda in the armed forces, and supporting traditional standards and requirements, has gone so far as to lend its expertise in a lawsuit over Harvard’s admissions policies, in the form of an amicus curiae (“friend of the court”) filing (pdf), obtained by The Epoch Times. The filing argues that diversity and inclusion policies have harmed the military and aren’t a good idea in either the public or private spheres.

A New Vision for the Military

The NDAA contains some provisions that those skeptical of civilian oversight of the military have welcomed, such as ending the vaccine requirement for service members that was a source of controversy and incurred lawsuits from those who objected on religious grounds or felt that they weren’t sufficiently at risk to need to undergo such measures.

But among the other provisions of the NDAA is a requirement that Reserve Officers’ Training Corps (ROTC) programs collect and report data on the racial and gender composition of those who complete the programs or receive scholarships based on their participation. ROTC is a college program that trains students to be commissioned officers. This measure comes on the heels of many changes in recent years that defense experts say have wrecked the military’s traditional culture and undermined combat readiness and effectiveness, notably a new Army Combat Fitness Test (ACFT) with different requirements for men and women.

Setting reporting requirements and recruitment goals on the basis of race isn’t only irrelevant to combat training and preparedness, and harmful to morale, but is also blatantly illegal, according to Scott McQuarrie, president of Veterans for Fairness and Merit (VFM), a veterans’ organization whose membership currently stands at 644 former officers from various branches of the armed services.

“Warfighters don’t care what the skin color of their leaders is. They respond for a lot of reasons, and of course their training, without regard for skin color,” McQuarrie told The Epoch Times.

From a legal point of view, the race of those seeking admission to or participating in ROTC programs is irrelevant, and to put pressure on ROTC programs to alter their composition according to some arbitrarily defined metric violates the spirit and letter of the Constitution and more recent legislation, he argued.

“Certainly, our country can be defended without having to suspend the equal protection clause of the Constitution and Title 6 of the Civil Rights Act of 1964,” McQuarrie said.

The nation has reached a juncture where the military is no longer considered to occupy its own distinct sphere, with a set of idiosyncratic traditions, customs, standards, and requirements, and the principles invoked to remake the military and higher education are much the same, McQuarrie said. The approach in the two realms is so similar that McQuarrie saw fit to file an amicus curiae brief, applying the arguments he had made in a military context to the case of Students for Fair Admissions v. President & Fellows of Harvard College, which the Supreme Court is currently considering after hearing arguments in October 2022.

Advocates of diversity have tried to base their case partly on the legal precedent of Grutter v. Bollinger. That 2003 Supreme Court ruling held that the equal protection clause of the 14th Amendment and the Civil Rights Act of 1964, don’t rule out the use of race as one of the factors in university admissions, and in the interest of diversity, it’s acceptable to consider race along with other factors.

No one is free to ignore the explicit language of the Constitution and the Civil Rights Act of 1964 based purely on a subjective sense that good can come from doing so, McQuarrie argued. The new priorities of diversity and inclusion, which aren’t universally held to be necessary for military effectiveness, fail to meet the high legal standard required for any circumvention of legal precedent, he said.

“If you understand the basics of the law, it’s pretty obvious that the other side contrived this argument. Courts have to examine a practice by a university, say, to see whether it is violating the Constitution. The legal bar, for those who want to use extraconstitutional means, is very high. You have to prove a compelling state or national interest—that’s the buzz phrase—so grave as to warrant suspension of the Constitution.

“Quite clearly, [advocates of diversity] make this assertion that it’s a national security imperative that the military be allowed to use racial preferences in order to meet that high bar. Most people being candid with you would say that’s a very far-fetched argument,” McQuarrie said.

“In fact, our military has operated over the last few generations effectively without having to suspend the Constitution. In Bosnia, Panama, the Gulf War, Afghanistan, and Iraq, the military did quite well, and we don’t need to violate the Constitution for the military to execute its mission,” he added.

The data on the military’s performance was useful in crafting the amicus curiae filing in the Harvard lawsuit, McQuarrie noted.

“We felt that the court needed to be educated on that basic argument. We took published data from the service academies. They are using racial preferences. The data showed that the consequences of using such preferences are not good. The bottom line is that the service academies are admitting applicants who are not as well qualified on the basis of race, and in some cases gender, and in doing so are rejecting applicants who have higher qualifications,” he said.

“I’m not just referring to academic scores. The service academies have a very elaborate means of evaluating applications, and there are hundreds of variables that can contribute to the score on an application,” he added.

The service academies have developed a system over the years for determining a candidate’s overall score, but the data in VFM’s filing suggest that they have forgone applying such time-tested criteria and made decisions on the basis of race.

Privileging one race over another in admissions is as harmful to morale and cohesion in civilian contexts as in military ones, McQuarrie believes. One of the studies cited in VFM’s brief is the work of the Center for Equal Opportunity which first came out in 1996, McQuarrie noted. It examined admissions policies and the results of racial preferences at two service institutions, the U.S. Naval Academy and the U.S. Military Academy at West Point.

“The results of the study showed that it was more difficult for whites to get admitted to those academies than it was for certain minority groups. Asians are discriminated against at West Point in comparison to whites and everyone else,” McQuarrie said.

The push for diversity and the emphasis on race as one of its primary indices directly undermines a military culture where servicemen are supposed to think less, not more, about differentiating features, VFM’s brief contends.

“This selfless-servant, ‘colorblind’ culture is a national security imperative that is seriously weakened by racial preferences … Our warfighters [are] expected to ignore racial and other differences to be maximally effective on the battlefield. When bullets are flying and mortar shells landing, warfighters cannot and do not care about the race of their buddy or of their leaders. They must be (and are) willing to risk their lives for another warfighter, regardless of skin color,” the brief states.

As harmful as the push for diversity under the current administration may be, it is useful to remember that the phenomenon has been going on for many years, and undoing the damage will require sustained and vigorous litigation, McQuarrie argued.

Other defense experts question the utility of the reporting requirement imposed by the NDAA.

Susan Katz Keating, the publisher of Soldier of Fortune magazine and the author of an influential 2015 exposé of gender diversity in the military published in People magazine, suggested that the measure was a symbolic move to boost diversity.

“This is just a way for someone to say, ‘Absolutely, we’ve met our diverse recruitment goals.’ But I’m not sure what that will do in real life,” Keating told The Epoch Times.

She wonders about what might ensue if those who have pushed for the reporting requirement find that the numbers regarding gender diversity in ROTC programs fall short of their expectations.

“If the numbers come back and someone is not happy with the numbers, how do you get people to join ROTC if they weren’t already inclined to do so? So I’m curious, in terms of gender diversity, how they would try to sweeten the pot or find women who might otherwise be looking at a different career path or field. How are you going to reach your target audience and convince them to join?” Keating asked.

Here the advocates of diversity may be seeking to reshape a peacetime military in ways that will prove shortsighted in the event of a large-scale conflict, she suggested. Such a scenario may force some to confront the reality behind the gender-normed illusion.

“It seems to me that a lot of this is geared toward a peacetime military, so what will happen if there is a major hot war, how will that shake down? I recognize that now, there are some women who want to have a military career path and might pursue some of the more traditional, heavy-testosterone military occupational specialties, such as infantry, and I’m just curious to see, if there’s a hot war, would that change? Are you going to find women volunteering to go into the front lines? I hope we don’t have to find out,” Keating said.

“The military’s ultimate purpose is defense, and in many cases, it’s a very physical process,” she added.

Department of Defense officials didn’t respond by press time to a request by The Epoch Times for comment.