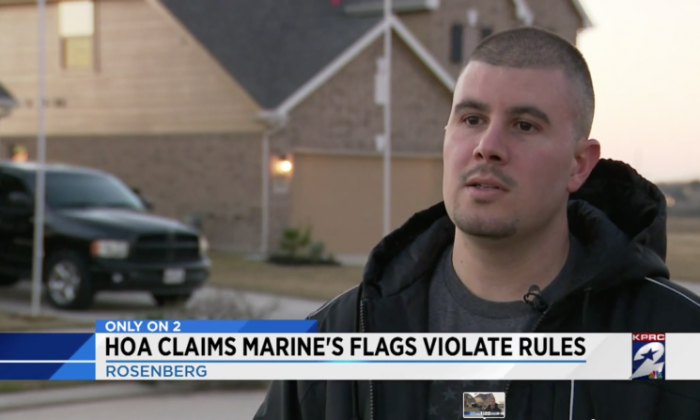 Cpl. Michael Pereira. (Screenshot via KPRC video below)
US News

A Marine Corps veteran and his wife were outraged when their homeowners’ association told them they couldn’t fly their American and Marine Corps flags outside their home in Rosenberg, Texas, KPRC reported.

The couple moved into their home two months ago but were notified of the homeowner association’s rule against flying flags until just a few a days ago.

The couple put up the flags as soon as they moved into their home in the Kingdom Heights subdivision in Rosenberg.

“They represent this county. They represent a brotherhood I was a part of,” Pereira said. “They show respect for all the people I went to war with and the ones that didn’t come back.”

Pereira would raise the flags every morning and lower them every night. There was never a problem until now.

“I’m guessing somebody didn’t like it or someone reported it or something because I got a call from the property manager who works for the homeowners association asking me to take them down,” he said.

The former Marine asked for the association rules to be modified. The association responded by having him fill out a construction modification request. Pereira is still waiting to hear back.

“In this particular case Pereira installed two 20 foot-long flag poles [sic] on both sides of his driveway [one on each side] without first submitting the plans or seeking approval,” Sears told Fox News. “The problem is that one of the poles is in a utility easement, both poles are within the 25 feet building setback line and the restrictions [and Texas Property Code] only allow for the installation of one flagpole.”

“We have already reached out to the veteran to let him know that the issue is not the flags and are awaiting a response,” Sears said. “We are certainly willing to continue to work with this veteran in relocating one of his poles and would be remise [sic] if we did not take this opportunity to thank him for his personal sacrifice and service to our Country.”