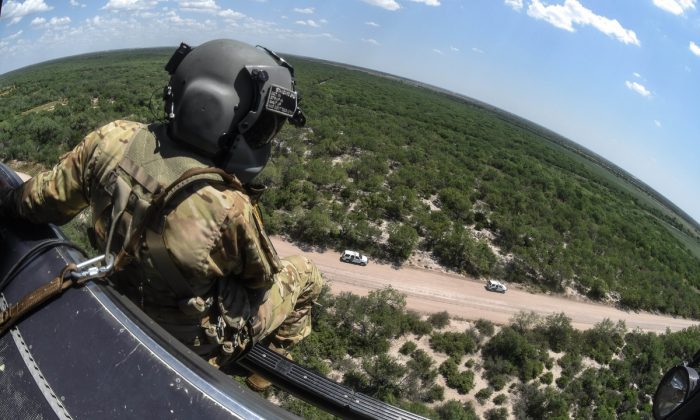 Military Requested to Send up to 1,000 Troops to Border, Officials Say

The U.S. military has received a request from the Department of Homeland Security (DHS) for troops to be deployed to the U.S.–Mexico border, two U.S. officials said Oct. 25.

President Donald Trump said in an Oct. 25 tweet he was “bringing out the military” to prevent illegal entry of a thousands-strong caravan traveling from Central America north through Mexico.

The military was examining the request that could require deploying between 800 and 1,000 active-duty troops to the border to assist with logistics and infrastructure, two officials told Reuters on condition of anonymity.

One official said that any troops deployed to the border would not be involved in “law enforcement” activities.

A federal law dating back to the 1870s restricts the use of the Army and other main branches of the military for civilian law enforcement on U.S. soil unless specifically authorized by Congress. But the military can provide support services to law enforcement and has done so on occasion since the 1980s.

Some specific statutes authorize the president to deploy troops within the United States for riot control or relief efforts after natural disasters.

The Pentagon said in a statement it was working with DHS to “determine the specifics of our support” to the Customs and Border Protection agency, part of DHS, but did not elaborate on any potential deployment of active-duty troops.

On Oct. 22, Trump said he had alerted Border Patrol and the U.S. military that the migrant caravan was a national emergency.

Trump has strongly opposed the illegal entry of migrants, both from the perspective of national security as well as national sovereignty.

“To those in the Caravan, turnaround, we are not letting people into the United States illegally,” Trump said in an Oct. 25 tweet. “Go back to your Country and if you want, apply for citizenship like millions of others are doing!”

To those in the Caravan, turnaround, we are not letting people into the United States illegally. Go back to your Country and if you want, apply for citizenship like millions of others are doing!

The caravan includes gang members or people with “significant criminal histories,” according to DHS.

Some 5,300 migrants gathered in the southern Mexican town of Mapastepec on the night of Oct. 24, a town official said, though one of the activist speakers for the caravan said 11,000 gathered the day before in Huixtla, a town further south.

As the caravan makes its way north, “citizens of countries outside Central America, including countries in the Middle East, Africa, South Asia, and elsewhere are currently traveling through Mexico toward the U.S.,” DHS spokesman Tyler Houlton said in an Oct. 23 tweet.

The caravan set off from Honduran city of San Pedro Sula on Oct. 13. The main crowd appeared organized, with people in identical green reflective vests leading and corralling the group as it walked or was transported by vehicles along the way.

While some locals appeared to have given rides to the migrants on small trucks, at least some of the migrants were transported part of the way in semi trucks. A video showed one of the organizers inviting the migrants into a semi truck in southern Mexico.

According to U.S. Vice President Mike Pence, Honduran President Juan Hernández said that the caravan was organized by leftist organizations and financed by Venezuela when they met for talks on Oct. 23.

One of the caravan organizers is Bartolo Fuentes, a former lawmaker for the Liberty and Refoundation (Libre) party, which controls almost a quarter of the Honduran legislature and advocates socialism. Fuentes was detained in Guatemala and returned back to Honduras.

A second group of more than a thousand people has started a similar trek from Guatemala.

About a million citizens of Guatemala, Honduras, and El Salvador had been apprehended by Border Patrol trying to enter the United States illegally in fiscal years 2013 to 2017 (pdf). The influx appears on the rise this year, based on incomplete 2018 data.

Trump said on Oct. 22 he had started to stop or substantially reduce aid to the three countries because they failed to do enough to stop the flow of illegal immigrants from their countries.

Senators Chuck Grassley (R-Iowa) and Mike Lee (R-Utah) asked the Trump administration to set up a “safe third country” agreement with Mexico. That would require “those seeking refugee status to make their claim in the first country of arrival,” meaning Central Americans would need to seek asylum in Mexico, instead of just traversing the country.

“Due to the likelihood that … national security threats could mask themselves within this large caravan population, at a minimum, our federal government must prioritize the security of American citizens over anything else,” the Senators said in an Oct. 23 letter.

The safe third country agreement, the Senators argue, would also help alleviate the overburdened refugee system in the United States, where about 850,000 remain waiting for their asylum cases to be resolved.

Central American migrants commonly apply for asylum in the United States, but most aren’t eligible because they are simply seeking better living conditions rather than fleeing state persecution.