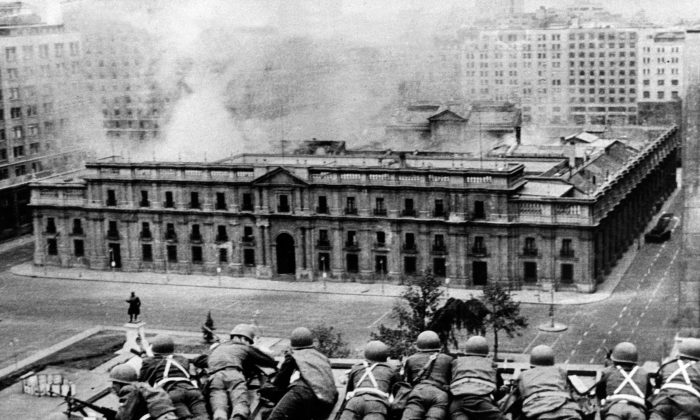 Chilean Army troops positioned on a rooftop fire on the La Moneda Palace in Santiago on Sept. 11, 1973, during the military coup led by General Augusto Pinochet which overthrew Chilean president Salvador Allende, who died in the attack on the palace. (OFF/AFP/Getty Images)
Opinion

The military upheaval in Turkey, whose final consequences are yet to be seen, highlights a major weakness in worldwide efforts to promote democracy. This event underscores the need to establish binding international legal principles to ban the recognition of military regimes as a result of coups d’état. Establishment of such principles, and the creation of the legal mechanisms for applying them, would foster democracy throughout the world.

The circumstances in Turkey mimic several similar situations in recent history: the coming to power of governments without support from the military. Once confronted with a threat to its political hegemony, the military either overthrows the civilian government or refuses to surrender power to democratically elected civilians.

Overt recognition by Western democracies or implied recognition through ambivalent signs of disapproval have encouraged military officers to overthrow many constitutional governments freely chosen by the people. The military relinquish power only when forced by popular will, or when its own incapacity to govern has made its position untenable.

This happened to the Greek junta after its debacle in Cyprus, to the Chilean regime under Augusto Pinochet, and to the Argentine military after the Falklands conflict. New principles could be developed, however, that would automatically bar the recognition of such de facto regimes.

Given the need to expand the role of the United Nations in keeping peace, the General Assembly and its International Law Commission could be called upon to draw up appropriate legislation. As the late Secretary-General Dag Hammarskjold once said, the United Nations is “the most appropriate place for development and change of international law on behalf of the whole society of states.”

Establishment of non-recognition of post coup d’état a universal principle raises some difficult practical questions. What about already established and recognized military regimes? These cases show the difficulties of applying the principle retroactively.

But what if a country’s military forces stage a coup against an oppressive or corrupt civilian regime? An ousted civilian government that has been freely elected by the people should not be denied recognition in favor of a post-coup military regime unless the overthrown government was responsible for gross human rights violations. Further, after a coup, recognition should be withheld until another civilian government is chosen in free and democratic elections.

Who will decide whether an ousted civilian regime was oppressive? Or whether elections staged by the military are free and fair? The logical body to make these assessments is the International Court of Justice at The Hague. The composition of the court and its responsibilities under such an expanded mandate should be decided by the U.N. International Law Commission.

Making the World Court responsible for decisions involving recognition of governments would prevent the issue from being subjected to the political crosscurrents of the U.N. General Assembly.

Non-recognition of military regimes responds to increasing worldwide demands to eliminate the plague of military dictatorships. Once established as a legal principle, it could become a remarkable step toward world peace and justice.