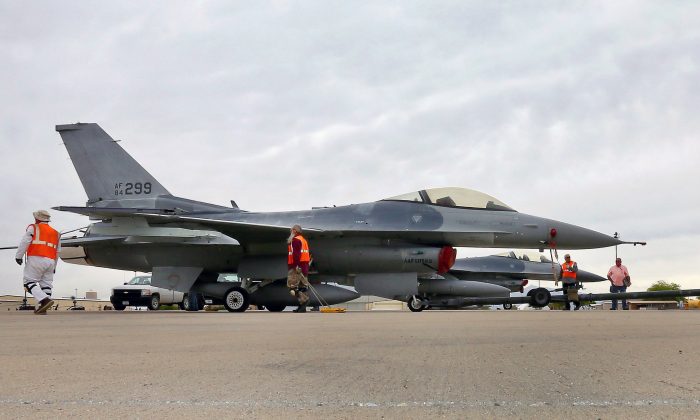 In this May 15, 2015, file photo, a boneyard crew tows an F-16 Fighting Falcon aircraft prior to the preservation process after its arrival at the 309th Aerospace Maintenance and Regeneration Group at Davis-Monthan Air Force Base in Tucson, Ariz. (AP Photo/Matt York)
US

Angel Ortega, of Douglas, said he heard a loud explosion and initially thought it was thunder before he saw the smoke.

Cochise County Sheriff’s Department spokeswoman Carol Capas tells the Arizona Daily Star (http://bit.ly/1GJtFCv) that the plane ruptured a gas line and sparked a fire, which “is almost out.” Once the flames are extinguished, officials will be able to assess the damage.

Capas tells The Associated Press that the crash started a grass fire that covered about 400 yards.

A board will be appointed to investigate the incident.