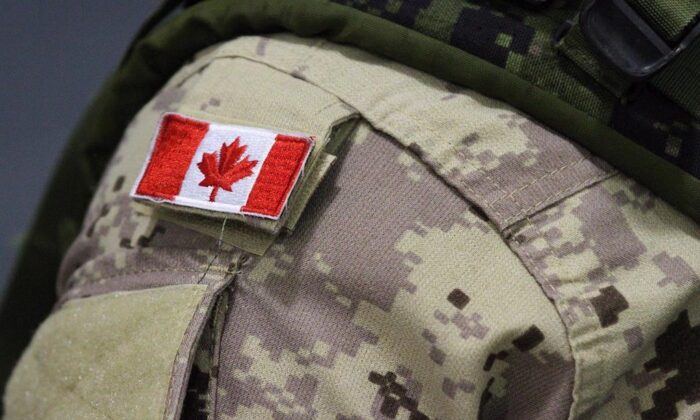 A Canadian flag patch is shown on a soldier's shoulder in Trenton, Ont., on Oct. 16, 2014. (Lars Hagberg/The Canadian Press)
Canada

A Canadian Armed Forces officer who questioned the safety of COVID-19 vaccines, and urged other military members not to follow the “unlawful order” of distributing them, was reprimanded and fined by a court martial on Sept. 22.

Officer Cadet Laszlo Kenderesi was issued a severe reprimand and a $4,200 fine. He was charged with one count of conduct to the prejudice of good order and discipline to which he pleaded guilty.

Military police originally charged the 60-year-old with one count of endeavouring to persuade another person to join in a mutiny, which carries a sentence of up to life imprisonment. Prosecutors withdrew the charge before the start of the court-martial.

The case related to a speech at a lockdown protest in Toronto’s Dundas Square on Dec. 5, 2020, in which Kenderesi appeared in full uniform and spoke out against the vaccines, questioning what they would do to people’s bodies.

“The reason is because nobody knows what this vaccine will do to your body,” he said at the rally. “Next month? Five years? Ten years? Nobody knows.”

“The indemnification for these vaccine companies is that you have to sign a piece of paper—basically they’re not liable, especially if you get sick or you die,” he added.

Kenderesi went on to urge other military members against distributing the vaccines requested by the governments.

“I’m asking you, military right now serving, truck drivers, medical engineers, whatever you are, do not take this unlawful order and distribution of this vaccine,” he said.

The Armed Forces had only days earlier received formal orders to start planning for the distribution of vaccines across the country, as Health Canada entered the final stages of reviewing vaccine candidates from Pfizer and Moderna.

Kenderesi delivered his apology at the start of his court-martial.

Pelletier told Kenderesi during sentencing that he was not being punished for his personal views about vaccines, but for participating in and publicly expressing his support for the demonstrations while in uniform.

“It’s even more unacceptable for Officer Cadet Kenderesi to incite members of the Canadian Armed Forces to disobey orders in relation to foreseen tasks of assisting in the distribution of vaccine,” the judge said.

In a separate affidavit read into the record, the court heard that Kenderesi was born and grew up in Hungary while the country was under the Soviet Union’s influence. The lockdowns in 2020 had affected him emotionally and financially, it said.

The court also heard that Kenderesi first joined the Canadian Armed Forces in 1978 and served as reserve cadet instructor for years in Borden, Ontario. He had virtually no contact with the military after 2018.