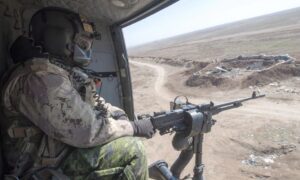 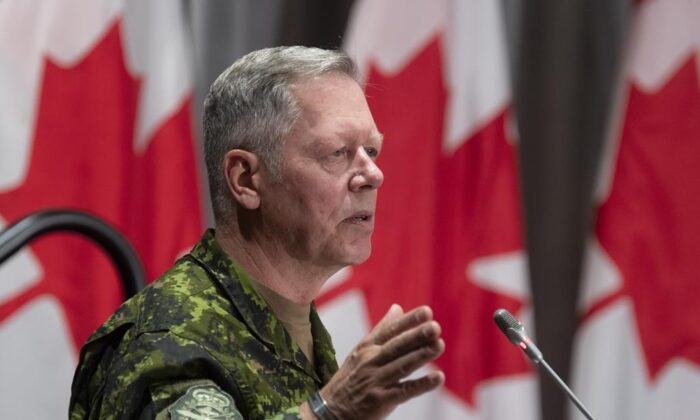 Chief of Defence Staff Jonathan Vance responds to a question during a news conference on June 26, 2020 in Ottawa. (The Canadian Press/Adrian Wyld)
Canada

OTTAWA—Canada’s military justice system will be on trial again Friday, when an appeal court weighs whether the handful of judges responsible for overseeing courts martial are truly independent.

The Court Martial Appeal Court hearing revolves around then-defence chief Jonathan Vance’s decision last year to place responsibility for the disciplining of Canada’s four military judges with an officer under his own command.

The move followed the unprecedented court martial of chief military judge Mario Dutil, who was accused of fraud and misconduct. The case collapsed last year owing to questions about whether he could receive a fair trial in the military system.

Three of the other four military judges have since stayed several cases, saying Vance’s order impinged upon their independence and thus robbed service members accused of wrongdoing of their right to fair trials.

The fate of those cases now hangs in the balance as three of the military appeal court’s civilian judges prepare to hear the matter, including one court martial involving three counts of sexual assault against an officer in British Columbia, Capt. Mark Iredale.

A decision is not expected Friday.

The appeal court hearing has focused attention on a long-standing complaint from experts and lawyers who say the military judges are not truly independent because they are first and foremost members of the Canadian Armed Forces.

The case also comes as the military justice system finds itself at a crossroads, with an independent review underway to ensure it is meeting Canada’s needs even as the Liberal government drags its feet on appointing a new chief military judge.

There have also been concerns about the slow implementation of reforms approved by Parliament nearly two years ago, which included numerous measures such as a declaration on victims’ rights designed to close gaps in the military justice system.

All of which comes amid ongoing questions over the military’s handling of sexual and hateful misconduct cases—and calls from some corners for civilian courts or judges to handle criminal cases involving the military.

“I would be much more comfortable if they follow the British example and had civilian lawyers who do military issues and military justice,” said retired major Tim Dunne, who is now a fellow with the Canadian Global Affairs Institute.

“My view is that the military justice system should not even exist as a forum for criminal offences, it should be done by criminal justice.”

Canada has been without a full-time chief military judge since Dutil retired in March, nine days after prosecutors withdrew their charges against him.

The federal cabinet is responsible for naming a replacement, but hasn’t done so.

Retired lieutenant-colonel Rory Fowler, now a lawyer specializing in military law in Kingston, Ont., contrasts that with the Trudeau government’s recent appointment of a new chief of the defence staff.

Not everyone is concerned that Dutil has not yet been replaced. Retired colonel Michel Drapeau, a lawyer specializing in military cases, says it makes sense for the government to wait given the different moving pieces.

Those include Friday’s appeals court hearing as well as a study set to be launched by the House of Commons defence committee and the independent review being conducted by retired Supreme Court justice Morris Fish that is already underway.

Fish has until June to table a report in Parliament on how the military justice system should be improved. He is interviewing service members across the country, including through virtual town hall meetings.

Drapeau has repeatedly raised concerns about what he believes is a lack of independence among military judges, alongside numerous other weaknesses and problems in the military justice system, which he hopes Fish will highlight.

“All in all, our soldiers are badly served,” Drapeau said in an email. “First, by a military justice system begging for reform. Second, by a CAF grievance system that is in shambles.”

The Judge Advocate General’s office, which is responsible for managing the military justice system, has played down any impact from the lack of a permanent chief military judge.

“The government of Canada continues to look to permanently fill the chief military judge role.”

But Fowler worries about a possible connection between the delay in appointing a chief military judge and Friday’s appeal court hearing, suggesting the case has devolved into a battle between senior military commanders and military judges.

“Until and unless (cabinet) appoints a new chief military judge, there continues to be this question mark about whether or not they’re using the appointment … as a carrot in order to try and get one of the military judges to break ranks,” he said.

“It at least is unpalatable that the (cabinet) has not appointed a new chief military judge. Particularly right now.”