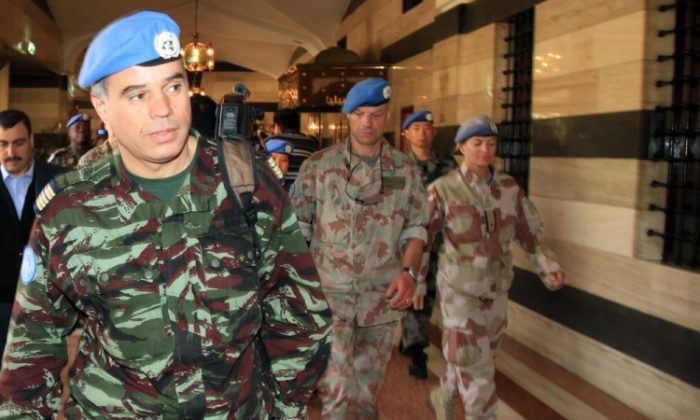 Colonel Ahmed Himmiche (L), Chief of UN observers in Syria, leaves his hotel in Damascus with his team to patrol flashpoint areas in the unrest-stricken country on April 25. (Louai Beshara/AFP/Getty Images)
Middle East

France is pushing the United Nations Security Council to consider military intervention in Syria if the U.N.-Arab League peace plan fails to halt the 13-month-long violence that has plagued the country, according to the foreign minister on Wednesday.

The situation in Syria “is unacceptable,” Foreign Minister Alain Juppe said in Paris, according to a transcript. “The Damascus regime does not respect its commitments” to international organizations, he added.

The peace plan requires Syria to withdraw its forces from cities, stop all forms of armed violence, and hold talks with the opposition.

Juppe demanded that at least 300 U.N. observers be allowed in the country to monitor the situation and said that if Damascus does not comply by May 5, France would push for a Chapter 7 resolution in the Security Council. The chapter includes a clause known as ‘the responsibility to protect,’ requiring the international community to act when states fail to protect their populations.

So far, the deployment of the observers as well as Syria’s willingness to follow the U.N.-Arab League peace plan has been “seriously compromised” by Damascus, Juppe said. “We cannot allow ourselves to be defied by the regime as it ignores” the peace plan, he added.

The foreign minister added that he thinks the peace plan should still be given a chance to work, but only on condition of the rapid deployment of the full number of U.N. observers to Syria.

U.S. ambassador to the U.N. Susan E. Rice emphasized to reporters on Tuesday that the onus is on the Syrian government to halt the violence and allow and free access to observers. “If that does not occur, we have said that we’re prepared to work towards consequences for the Syrian government and further action out of the Security Council,” she said.

Calling the situation on the ground unacceptable, Juppe noted that since the peace plan has been supposedly in effect in Syria, there have “even been reported cases where activists who met with U.N. observers were later executed by the regime.”

Opposition activists have reported daily killings, sometimes ranging the dozens, carried out across Syria by the army and security forces.

At least 18 people, including three children, were killed on Wednesday, the Local Coordination Committees network said. There were also videos uploaded of people who were allegedly killed after security forces opened fire on a bus in Idlib.