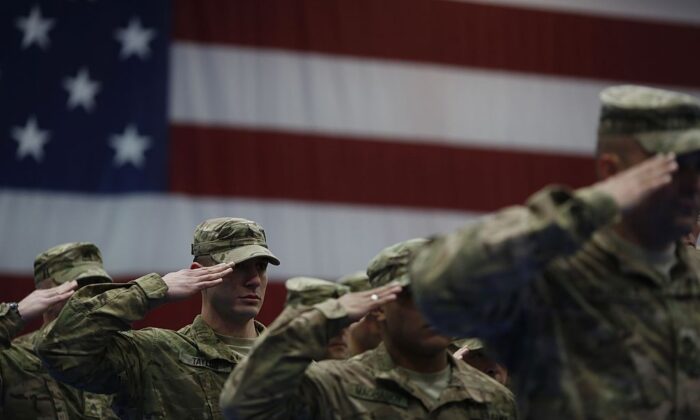 Soldiers from the U.S. Army's 3rd Brigade Combat Team, 1st Infantry Division, salute during the playing of the Star-Spangled Banner during a homecoming ceremony in the Natcher Physical Fitness Center in Fort Knox, Kentucky on Feb. 27, 2014. (Luke Sharrett/Getty Images)
By Terri Wu

The Epoch Times reached out to military bases regarding CRT cases reported via a whistleblower program launched at the end of May by Rep. Dan Crenshaw (R-Texas) and Sen. Tom Cotton (R-Ark.). Academies were also contacted for more curriculum details to support defense leaders’ argument that teaching CRT fosters an open-minded military. In response, the U.S. Naval Academy commented without addressing the CRT question, and West Point confirmed receiving and working on the request but didn’t comment.

In addition, the Office of the Secretary of Defense press operations and local military base deferred to each other in response to a CRT case inquiry.

The question was whether the whistleblower’s report of soldiers requiring to “experience and share a significant emotional event” occurred at inclusion training at the Patrick Space Force Base.

According to Crenshaw, to pass the training class, students have to share with the whole class that they have experienced a “significant emotional event” in which they “essentially admit privilege and repent racism.” Crenshaw added, “This was explicitly targeted towards white students and particularly white males. There was an assumption in the class that white people were racist, and white males were racist and sexist.”

The Epoch Times contacted the Patrick Space Force Base, where the “significant emotional event” reportedly occurred. The base’s public affairs office deferred the inquiry to the OSD press operations and Defense Spokesperson Maj. César Santiago wrote back in an email, “I refer you to the local military installation P.A. office for information regarding your request.”

Another case reported through the whistleblower program is “privilege walk.” The Moody Air Force Base trainees in Georgia have to take a step forward if they are white and take another step forward if they are male, and so on. This case is also included in Cotton’s June 10 memo (pdf) to the Senate Armed Services Committee: “The purpose of this trendy exercise is to physically separate participants based on the amount of ‘privilege’ they have. This message is damaging to the military organization, rank structure, and morale.”

The Moody Air Force Base public affairs office acknowledged receiving and working on The Epoch Times’ inquiry but hasn’t provided any comments.

Conservatives have expressed increasing concerns that the U.S. military is becoming “woke” as it incorporates the Critical Race Theory (CRT) in its training and education. They say that promoting CRT weakens the armed forces’ ability to support and defend the U.S. Constitution.

CRT is a practice that denounces U.S. and Western culture as a systematic form of oppression. Critics of the ideology—which is sometimes referred to as being “woke”—have said its proponents apply the Marxist tactic of “class struggle” to divide people along the lines of race, gender, and ethnicity to label them “oppressors” and “oppressed.”

Top defense leaders argued that teaching CRT is for keeping the military well-read. “On the issue of Critical Race Theory… I do think it is important, actually, for those of us in uniform to be open-minded and to be widely read.  And, the United States military academy is a university and it is important that we train and we understand, and I want to understand white rage—and I’m white,” said Gen. Mark Milley, the Joint Chiefs of Staff chairman, at a House budget hearing on June 23.

The key to knowing whether the U.S. military is promoting CRT or providing CRT as exposure is to see how the training relates to America’s objectives, “If it (CRT) is a kind of new movement now, what would it lead to? What is the aim of the State in making the Armed Forces read CRT?” Dr. Amrita Jash, a People’s Liberation Army (PLA) expert with India’s Centre for Land Warfare Studies (CLAWS), told The Epoch Times.

She added that the PLA promotes a single school of thought and emphasizes loyalty to the CCP and its general secretary Xi Jinping. Democratic countries should be different, and the military is supposed to be apolitical, she said.

Race is the fault line in the American society that communism exploits, said former Virginia state Senator Dick Black, a Vietnam War veteran, and Purple Heart Medal recipient. “During the days of the Soviet Union, they always recognized that race was a dividing point,” Black told The Epoch Times.

At the center of the debate is one course on the Politics of Race, Gender, and Sexuality (SS392) at West Point, the U.S. Military Academy (USMA). The course outline on the USMA official website includes critical legal studies, equality, and social classes in the United States.

The Epoch Times reached out to Professor Rachel Yon, instructor of SS392, for more details about how the course serves as a mind opener instead of promoting CRT. She forwarded the request to the USMA public affairs, who acknowledged receiving and working on the inquiry but didn’t provide a comment.

Another course, social inequality (NL450) at the U.S. Naval Academy (USNA), is named as a CRT class by CriticalRace.org. This website documents Critical Race Training in over 300 colleges and universities in the United States. The Epoch Times raised the question to USNA whether NL450 was CRT and whether USNA teaches systematic inequality in U.S. social structures along with two other courses, Gender and Leadership (NL485) and Gender Matters (NL486B).

The USNA responded in an email without addressing the CRT question: “The Naval Academy focuses on developing well-rounded future leaders in the Navy and Marine Corps. The courses you are asking about are elective courses; each semester, interested midshipmen voluntarily choose from a field of electives to learn about different subjects based on the course descriptions provided. Typically, a vast array of intellectual ideas, approaches, and theories are addressed during classroom discussions. Of note, Gender Matters is the only elective of the three mentioned taught in the past five years.”