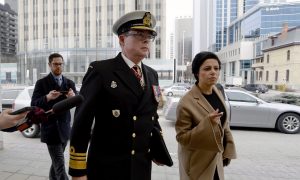 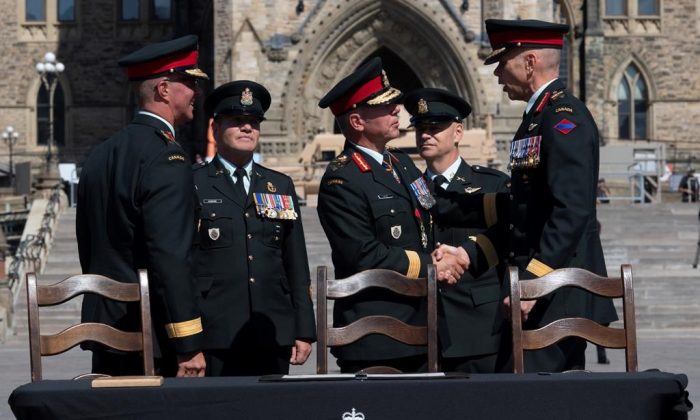 OTTAWA—Cannons boomed on Parliament Hill Tuesday as the military installed a new Canadian Army commander, hoping to march past years of instability in the most senior ranks over the failed prosecution of Vice-Admiral Mark Norman.

Under a cloudless sky on the lawn in front of Centre Block, Lt.-Gen. Wayne Eyre officially took the reins of the army from Lt.-Gen. Jean-Marc Lanthier in a ceremony that was at once familiar but also extremely unusual.

It was only two months ago that Eyre had been installed in a similar change-of-command ceremony as the chief of military personnel—a position replete with importance given the many human-resources challenges currently facing the Forces.

While most expected Eyre to remain in the job for several years, that all changed when the case against Norman was dropped in May—even before Eyre was made chief of military personnel.

Vance subsequently asked Lt.-Gen. Paul Wynnyk to step aside as the military’s second-in-command to make room for Norman, whom Wynnyk replaced as vice-chief of defence staff last year.

Norman then announced in June that he had reached a confidential settlement with the government and was retiring, prompting Vance to reverse course and ask Wynnyk to stay on.

But Wynnyk declined in July and announced he was pressing ahead with his own retirement, forcing Vance to move Lanthier from his post as army commander to the vice-chief position.

That opened up the hole that Eyre filled. His position will be filled by Vice-Admiral Haydn Edmundson in a change-of-command ceremony on Thursday.

Vance, Lanthier and Eyre acknowledged the twists and turns that preceded the new army commander’s installation on Tuesday, which military officials hoped would lead to calm and stability for the foreseeable future.

“I am humbled and more than a little surprised by the short notice to have been asked to command an institution with such a proud history,” said Eyre, who served as deputy commander of the UN mission in South Korea before taking over as chief of military personnel.

“The last two years have been quite the roller-coaster in terms of abrupt life-path changes.”

For his part, Vance used his address during the ceremony to express his confidence in both Lanthier and Eyre to fulfill their new roles as senior military leaders.

“Just as I’m sure Lt.-Gen. Eyre will serve with the same exceptional focus and determination, I know you will do so as vice-chief,” Vance said to Lanthier. “Congratulations to both of you.”