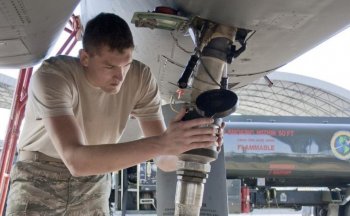 Senior Airman Jacob Prine checks the fuel connection to a F-15 Eagle on Oct. 22, 2010, prior to a flight test of new, environmentally-friendly fuel. The Air Force is working toward changing half of the continental U.S. jet fuel requirement to alternative (U.S. Air Force photo/2nd Lt. Andrew Caulk)
US

Joshua Philipp
Joshua Philipp is an award-winning investigative reporter with The Epoch Times and host of EpochTV's "Crossroads" program. He is a recognized expert on unrestricted warfare, asymmetrical hybrid warfare, subversion, and historical perspectives on today’s issues. His 10-plus years of research and investigations on the Chinese Communist Party, subversion, and related topics give him unique insight into the global threat and political landscape.
View profile
Follow
biggersmaller
Print
A movement in the military to develop affordable alternative fuels may be moving the industry toward fruition, yet has fundamental gaps, according to a recent report from the RAND Corporation.

The report drew criticism from military officials, and states “the use of alternative fuels offers no direct military benefit over the use of conventional petroleum-derived fuels.” The report is being presented to the secretary of Defense and the congressional Defense committees.

Each branch of the military is on a tight deadline to develop and use alternative fuels. The Navy has a 2020 deadline to have 50 percent of its fuel come from alternative sources, according to a Navy document.

The Air Force, “has played the lead role in Department of Defense efforts to evaluate and test alternative fuels,” and plans to reach the 50 percent minimum by 2016, according to the RAND report.

A current gap, according to RAND, is that there is a lack of consolidated effort in the Department of Defense (DOD) to develop such fuels. “Most of the DOD effort in alternative fuel development consists of a collection of independent projects, each focusing on a single engineering concept,” states the report.

“At present, no single DOD organization has the critical mass of expertise and engineering resources required to bring alternative fuel systems to commercial readiness,” it says, adding that it may be more effective to have a single military branch handle development of alternative fuels.

Military officials were quick to defend against the report’s claims.

Deputy Assistant Secretary of the Navy for Energy Tom Hicks said the report has “factual errors” and was based on “secondhand knowledge.” The report is “more of an op-ed than serious research,” Hicks said during a DOD Bloggers Roundtable on Jan. 25.

“So we have some serious reservations about the report, about the conclusions in the report,” said Hicks, according to a Navy transcript of the discussion.

He added that the Navy, based on its engagement with the alternative fuels industry, has “come to some far different conclusions than this report suggests.”

The military’s ability to lower alternative fuel prices was a key part of the RAND report. It stated, “Even if alternative fuels can be produced at costs below the prevailing costs for conventional fuels, they will be priced at market rates.”

The military uses close to 2 percent of the nation’s petroleum, making it the largest consumer next to the commercial aviation industry, according to Hicks.

He added that history has shown that the military can drive fuel markets. “You know, we've led numerous energy revolutions, you know—so going from sail to oil, oil to coal, bringing on nuclear,” Hicks said, adding “I think this is yet another area where we can help lead that market in transforming and bringing on biofuels into the mix.”

National security is among the main drivers behind the military’s efforts to develop alternative fuels.

"The larger picture of using these fuels is that it allows the Air Force to purchase more fuel from inside our borders, in turn reducing our dependence on foreign oil,” said 1st Lt. Luke Gaalswyk, with the Alternative Fuels Certification Office, in an Air Force press release.

This was one of the few points that both the Navy and the RAND report were in agreement on.

Hicks said every barrel of fuel that is produced and purchased within the United States, rather than being imported “from countries that do not care for us, [or] care for our policies … goes right to our national security interests.”

RAND concurred, stating that if competition in the fuel market lowered oil prices, it would “likely decrease financial support to large terrorist organizations such as Hamas and Hezbollah.”