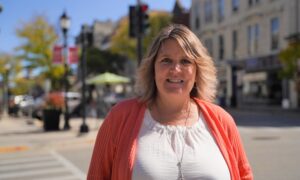 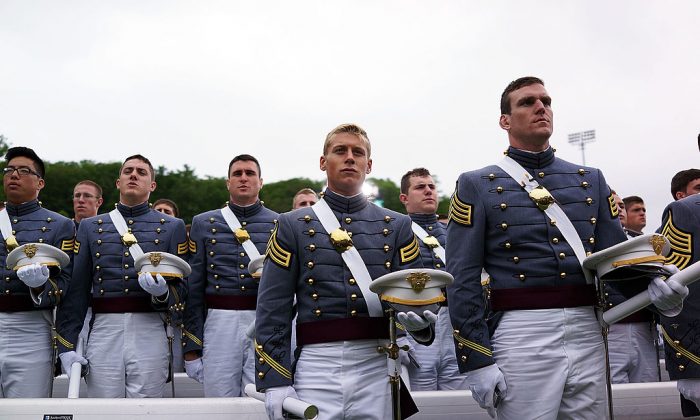 Cadets at the conclusion of the graduation ceremony at the U.S. Military Academy at West Point. (Spencer Platt/Getty Images)
US Features

The West Point Military Academy issued a statement on the brewing controversy surrounding one of their graduates, a current Army officer who posted photos of himself with pro-communist messages.

Officer Spenser Rapone’s recent social media photo posts show him in military uniform with the slogan “Communism Will Win” written in his hat, facing the camera. Another photo he posted in order to confirm the suspicions around his political views shows him opening the top of his military uniform to expose a Che Guevara shirt. He writes “In case there was any lingering doubt, hasta la victoria siempre.” The Spanish slogan is associated with Guevara and his aims to create a communist society.

Rapone is a member of the Democratic Socialists of America (DSA), a prominent communist front group. The aims of the DSA are decidedly anti-American and anti-U.S. military.

Rapone’s twitter page, in which he posts under the handle @punkproletarian and username Commie Bebop, displays a cover photo with a communist hammer and sickle flag. His other more recent posts, aside from the photos in which he reveals himself in military uniform as pro-communist, consist of support for sports players kneeling during the national anthem.

In case there was any lingering doubt, hasta la victoria siempre pic.twitter.com/0XrW38wcCk

Virtually all of his other posts and most of the people he communicates with on the page fume hate for the U.S. government and its military directives.

The former congressman who nominated Rapone for admission to West Point has stated that he disavows the officer’s comments.

“Several years ago, I met Spenser Rapone when he was a high school student seeking an appointment to West Point,” said Former Democratic Rep. Jason Altmire of Pennsylvania to The Daily Caller. “At the time, he was an outstanding, well-rounded student who came from a good family. I have not been in touch with him in the years since the appointment, and I was shocked and extremely disappointed in the recent reports of his indefensible actions.”

Altmire went on to express his disappointment.

“The behavior of 2nd Lieutenant Rapone is symbolic of a larger problem in our society — the epidemic of incivility in our public discourse,” added Altmire. “While I strongly support the rights of American citizens to express their opinions, the actions of 2nd Lieutenant Rapone are abhorrent and appear to be in clear violation of the Uniform Code of Military Justice, in addition to being inconsistent with the values of the United States Military Academy. I have no doubt that the U.S. Army will take appropriate action.”

Richard L. Rapone, the officer’s father and the treasurer of Lawrence County, Pennsylvania, also disavowed his son’s views, in a post to his Facebook page.

“In regards to my son Spenser Rapone, I disavow his political views and overall politics. I am very disappointed in the direction he has chosen and as his father it greatly saddens me.”

West Point expressed its support in the U.S. Army’s investigation into the matter as part of its statement on Rapone.

“As figures of public trust, members of the military must exhibit exemplary conduct, and are prohibited from engaging in certain expressions of political speech in uniform. Second Lieutenant Rapone’s chain of command is aware of his actions and is looking into the matter,” the statement continued. “The academy is prepared to assist the officer’s chain of command as required.”