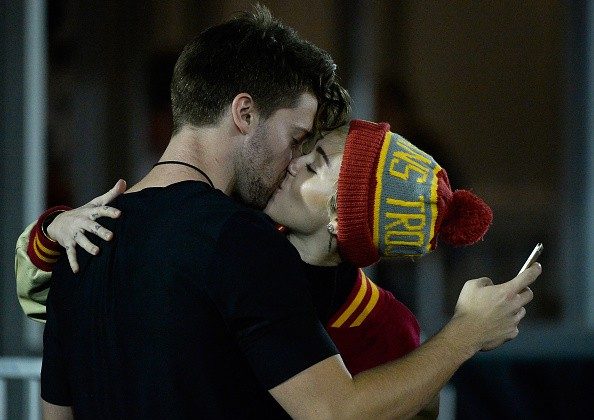 Miley Cyrus is reportedly pregnant with boyfriend Patrick Schwarzenegger’s child, according to a new report.

A friend allegedly told Life & Style magazine that she’s given up smoking pot and drinking. “Miley gave up drinking and smoking pot for a few weeks because of it, but she’s having a hard time saying ‘No.’ Some people believe that she’d need professional help to stay sober for nine months,” the person said.

The person also said that her “period is late.” However, Life & Style claimed she was pregnant in April, which turned out to be entirely false.

GossipCop, however, said that the whole thing is false once again. The website states:

Life & Style is suggesting there’s a drug-addicted fetus inside Miley Cyrus right now. Life & Style has repeatedly proven that it knows nothing about what’s happening with Cyrus, and has somehow sunk even lower. A rep for Cyrus tells Gossip Cop exclusively that the latest report is “more lies.”

Over the weekend, Cyrus was hospitalized for a wrist injury.

According to our sources, Miley had a simple outpatient procedure to remove a cyst that had been giving her problems for sometime. We’re told it’s a one-time thing and will not require any additional procedures. … The 22 year-old singer snapped a photo in an L.A. ER, presumably of the wound — but just like the rest of her Instagram … she photoshopped a happy face.

People magazine later reported that she covered up her wrist injury at the 25th Annual KROQ Almost Acoustic Christmas concert in Los Angeles. She appeared at the event with Schwarzenegger. When he sat down with her, the magazine said they kissed and engaged in “PDA as if they hadn’t seen each other in weeks.”