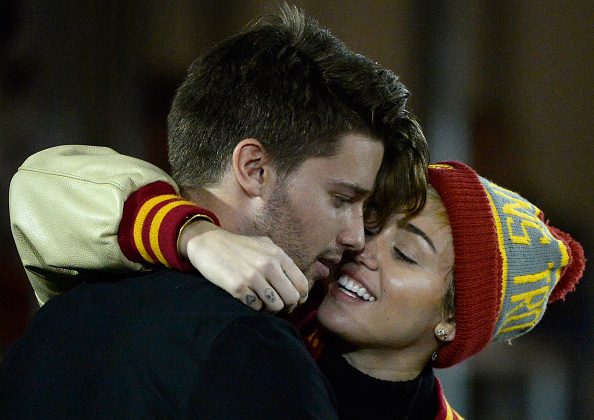 It sounds like a hoax, but apparently Life & Style went ahead and published a front-page article and photo saying Cyrus, 22, will be a mother.

Last year, Life & Style claimed that the “We Can’t Stop” singer was pregnant, and that turned out to be just a rumor.

“Friends are convinced she’s in the early stages of pregnancy,” a source told the magazine. According to the source, Cyrus hasn’t spoken with Schwarzenegger yet, has “weird cravings,” and she isn’t drinking or smoking. “She loves Patrick — and she loves the idea of having a Kennedy baby!” the person claims.

A representative for Cyrus spoke with GossipCop, saying the whole story is bogus and “not true.”

“Miley and Patrick were spotted hugging, kissing and dancing together,” a source told E! News. “Miley was in her own world with Patrick. She was all over him.”

Cyrus, the source added, “seemed to have a great time. She was constantly smiling and seemed really happy with Patrick. No one held back. It was Miley’s birthday and everyone made sure she had a good time. She is the life of the party and everyone seems to feed off of her energy.”

Schwarzenegger is the son of action movie star and ex-California Gov. Arnold Schwarzenegger and Maria Shriver, who herself is a member of the Kennedy family.