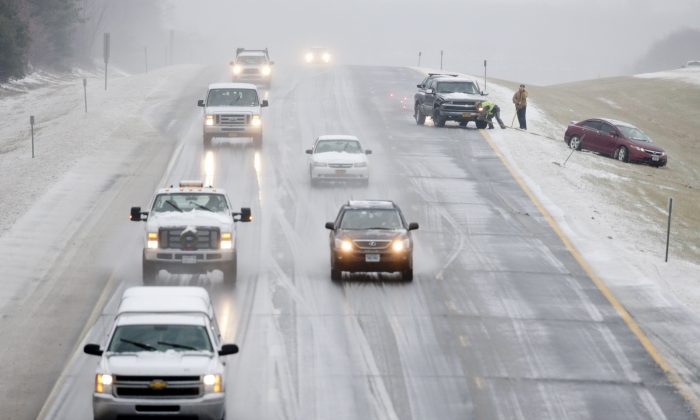 A vehicle is pulled from the median on Interstate 90 on Tuesday, Dec. 29, 2015, in East Greenbush, N.Y. Snow, sleet, freezing rain and gusty winds are creating treacherous driving conditions across upstate New York as eastern parts of the state receive their first severe weather of the winter season. (AP Photo/Mike Groll)
New York

You know the snow’s bad when people are SKIING in downtown #Syracuse. Photo by @NettDennis. pic.twitter.com/qgBFXIhiBH

Wow! Look at all that #snow in downtown #Syracuse on https://t.co/R9xNVkIR5d! pic.twitter.com/diGnQSe78K

The Thruway Authority says Interstate 90 is closed in both directions Tuesday afternoon between Exit 39 and Exit 40. The agency says there are multiple accidents along that section of the highway due to severe weather.

Hazardous driving conditions from Lake Ontario storms forced the closures of dozens of schools in centralNew York, including the Syracuse city district, giving students an extra day off after the Martin Luther King Jr. holiday.

Lake-effect storms have dumped up to nearly 20 inches of snow over the past two days in areas east of Lake Erie, with some schools in Chautauqua and Cattaraugus counties south of Buffalo calling off classes.