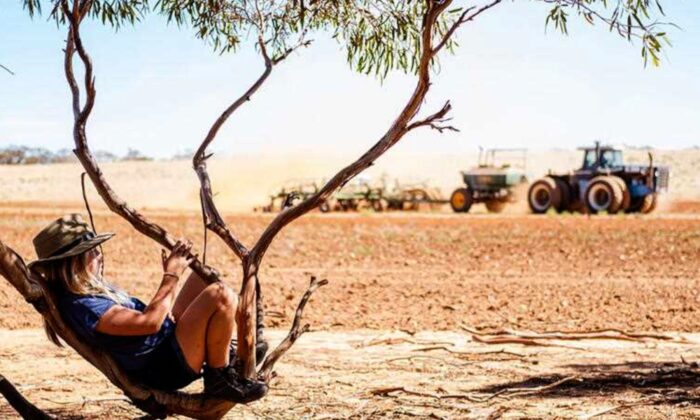 A supplied image obtained on Monday, June 20, 2022, of Poppy Thannhauser waits for her dad to finish work at a farm near Mildura, Victoria, in March 2022. The image was taken by her mother Aimee, as is one of 12 winners of Rural Aid's Spirit of the Bush photography awards. (AAP/Rural Aid/Aimee Thannhauser)
Australia

Mildura, a regional city in Victoria’s northwest with a population of just under 56,000, has emerged as Australia’s richest farming region, according to figures by the Australian Bureau of Statistics (ABS).

According to the ABS, total agriculture production within the Mildura Rural City Council was worth $1.13 billion (US$911 million) in 2020-21, making it the most of any Australian local government area.

Just over AU$324 million came from grapes, while total broad-acre crops came in at $250 million.

Total nurseries, cut flowers or cultivated brought in just under $39 million, while the total value of crops came in at just over $1 billion.

Toowoomba, in southeast Queensland, came in second for total agriculture production by local government area, bringing in nearly $1.1 billion, with total crops valued at just under AU$375 million. Livestock products such as wool, milk and eggs brought in just under  $332 million.

Carrathool, in the NSW western Riverina, and Moree Plains in northern NSW came in third and fourth, respectively, with Moree Plains emerging as Australia’s cropping shire with $915 million coming from broad-acre crops.

According to ABS data, 12 of the top 25 shires were in Victoria, seven in Queensland, four in NSW, one in South Australia, and one in Western Australia, reported the Herald Sun.

In 2020-21, Australian agriculture saw a 17 percent increase in value to AU$71 billion, according to the ABS.

“Many farmers reported crop yields being at ‘once in a lifetime’ levels, with records broken in many regions for key commodities. Compared with the previous year, the value of wheat grew by 99 percent to $9.9 billion in 2020-21, with production up 120 per cent,” Clark said in a statement.

According to a June report by Australia’s Department of Agriculture, Fisheries and Forestry (ABARES), the opening of the winter cropping season in 2022–23 has been very favourable in most cropping regions.

Total rainfall between February and April was above average in most cropping regions in eastern states and Western Australia, which have helped to support high soil moisture profiles for the planting of winter crops.

“However, heavy May rainfall in Queensland and large parts of New South Wales has caused waterlogging issues in some regions experiencing ongoing wet conditions,” the ABARES website states.

“This has limited access to fields for some growers in early winter and is likely to prevent them from planting a full program if conditions in June remain wet.”

Summer crop production in 2021-22 is estimated to reach 5.5 million tonnes, despite well above average rainfall between February and March, which led to flooding, weather damage, harvest delays, and the inundation and loss of some summer crops.

“The extent of damage was significant for some growers but was localised and did not have a major impact on national volumes,” ABARES states.