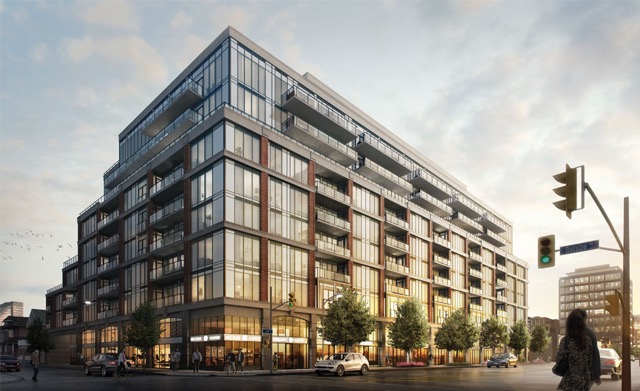 Rendering of J. Davis House, a new condo development by Mattamy Homes and Biddington Homes in preconstruction at 1955 Yonge Street in Toronto. The development is scheduled for completion in 2018. (Milborne Real Estate Inc.)
Canadian Content

Hunter Milborne has been at the forefront of the Toronto area condominium scene from its early stages nearly four decades ago. The “Dean of Condos” and his firm, Milborne Real Estate Inc., continue to be a leading force in the GTA and other Canadian condo markets.

Milborne, CEO of the company, and his daughter Amanda Milborne Ireland, director of sales and marketing, recently sat down with the Epoch Times to discuss the 2015 market and what they see for 2016.

“In 2015, a lot of people didn’t know what to expect,” says Milborne Ireland. “We were incredibly impressed with how well it turned out.”

There’s reason for optimism in the Year of the Monkey and she explains how possible interest rate hikes may influence the market.

“Interest rates will go up at some point and affect choice and price,” she says. Buyers will gravitate toward Triple-A locations and those on the subway. “There is such a focus on transit and it’s very much in people’s consciousness.”

One neighbourhood in hot demand is transit-friendly Yonge Eglinton, and the Milbornes say Citylights on Broadway by Pemberton Group in that neighbourhood will be hit with investors, with a high percentage of Asian investors. It will include two towers joined by a podium.

Other key neighbourhoods include Yonge and Bloor, Yonge and Sheppard, and Bloor and Dundas, where there is already a subway line, says Milborne. One of the noteworthy projects at Yonge and Bloor will be 8 Cumberland by Great Gulf and Phantom Developments, “a very high profile site.”

With the Crosstown LRT coming, Don Mills and Eglinton is another area of opportunity, say the Milbornes and a prime example is 1215 York Mills at the Ravine by Urban Capital and Alit Developments. It will be the first building in a master-planned community of condos, townhomes, parks and stores. The TTC is at the door and it’s in close proximity to the Don Valley Parkway and the 401. When it’s completed, there will be seven buildings and two new public parks.

“There’s a rental guarantee to the investor and you can be from the door to downtown in 30 minutes by bus,” says Milborne Ireland. “It’s the best of uptown and downtown and it’s one of the area’s largest employment areas.”

There is a lot of interest from local buyers and those from Ajax and Pickering. It’s also been popular with Asian buyers, who represent about 40 percent of purchasers.
Lindvest is blazing the path in the Don Mills-Eglinton neighbourhood with Sonic, the first new condominium development in the area, across the street from the Ontario Science Centre. Sonic will be a short walk from the coming Crosstown LRT station and in close proximity to shopping, restaurants, excellent schools, and extensive parks and greenspace. The first tower has been launched, with a second to come in Phase 2.

The Lower Junction is another neighbourhood to watch. Castlepoint Numa will be building a mixed-use community on a large eight-acre site and the project will include the restoration of the 1919 Tower Automotive Building. The Museum of Contemporary Canadian Art will be moving to the first two-and-a-half storeys of that building at 158 Sterling Road.

Milborne also sees growing interest for “interesting or out-of-town projects” such as a new mid-rise condo in downtown Georgetown geared to empty nesters.

As for other trends, Milborne Ireland says stacked townhouses in infill sites are taking off, especially for first-time buyers and move-up buyers with families who are willing to move farther from the subway to have more space. One example is Danforth Square, a mixed-used community of condos and townhouses near Warden and Danforth Avenues, about five minutes from the subway and GO.

Student residence condos are another rising trend and are good for investors who might not be able to afford to buy a downtown condo but can pay $150,000 to buy a small condo near a college or university.

“Student housing is recession-proof and you’ll always have the ability to rent the suites,” Millborne says.