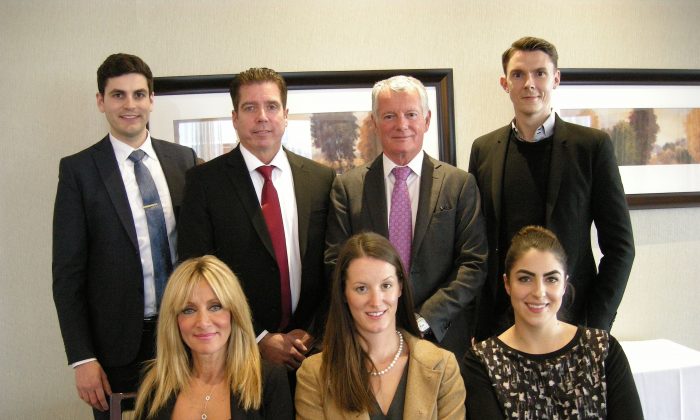 Hunter Milborne and his sales force settle into chairs around a table in the ballroom of the Westin Prince in North York.

They’ve just received a lunchtime update on the state of GTA real estate from RealNet Canada chief/sage George Carras, so Milborne and his team are perfectly primed to offer Epoch Times their outlook for 2015.

There’s currently a six-month supply of low-rise homes on the market, and less than one year’s worth of high-rise units, according to RealNet. And there’s next to no vacant unsold inventory, between 1,500 and 2,000 units, “which has pretty much been the same for the past 10 to 12 years,” says Milborne. “A one-month supply.”

For all the fears we’ve been over-building condos, turns out the city may not be producing enough units each year to accommodate a population the size of Barrie’s that’s moving to the GTA each year. And it’s projected that a population equivalent to Vancouver’s—2.4 million people—will be coming here in the next 25 years.

“Those people have to be accommodated, and if you have a diminishing supply of low-rise construction, it’s going to have to be taken up by the high-rise (segment),” Milborne explains. “Which is exciting for us.”

Indeed, Milborne and his sales squad had a good year last year with high-profile high-rise condos, particularly a trio of Lanterra Developments downtown projects: Wellesley on the Park, one of the most successful launches of 2014; Teahouse Condos at 501 Yonge, another top-selling debut; and the third phase of The Britt, the revamp of the former Sutton Place Hotel.

Brokers and buyers took a bit of a breather to start the year, she says, and now the irrepressible Toronto condo industry is ready for another round. “Everybody’s pumped.”

Milborne has just launched Citylights on Broadway, a two-tower, 900-unit project from Pemberton Group on Broadway Ave. halfway between Yonge St. and Mount Pleasant Rd., with 30,000 square feet of indoor and outdoor amenities, including two pools.

The development is targeting investors and end users alike, notes Amanda Milborne Ireland, the firm’s director of sales and marketing. All one-bedroom units at Citylights will have two bathrooms, she points out. “So they could essentially operate like a two-bedroom. That’s something we haven’t seen across all our projects yet.”

At York Mills Rd. near the Don Valley Parkway, Milborne is working with Urban Capital and ALIT Developments to launch the first phase in a five-building master-planned community, The Ravine. The Cecconi Simone-designed suites range from 500 to 1,000 square feet.

Urban Capital—the builders behind the architecturally intriguing River City in the West Don Lands and Tableau Condos at Richmond and Peter Streets—value great design, notes Milborne Ireland. And if the lovely watercolour renderings for The Ravine offer any indication, the firm’s latest project will hold its own on that score.

“They’re revamping the area but utilizing what’s there,” says Milborne sales representative Cara Hirsch. “You don’t see that much in Toronto anymore.”

The project, boasting “forever views” of the city skyline from the fifth floor up, has units under 500 square feet that will attract investors, but suites over 1,000 square feet that appeal to end users, especially downsizing homeowners who live in the neighbourhood.

“There are really good-sized two bedrooms and two bedroom plus dens,” says Hirsch, “which are becoming difficult to find.”

Milborne sees no reason 2015 should prove to be any less robust for the Toronto condo market than the year before. “I think it’ll be stronger,” says the veteran broker.

Plunging oil prices will increase disposable income by an estimated $1,800 per household, Milborne notes, referencing the RealNet presentation. “That’s the equivalent of a 0.5 per cent drop in interest rates.” Speaking of interest rates, “everyone thought they would be increasing,” he says, “Now they’ve dropped.”

An uptick in disposable income coupled with a dip in interest rates can only mean good things ahead in 2015 for the Toronto condo market, says Milborne.

“Those two things alone on a macro basis will give people more motivation to purchase something.”