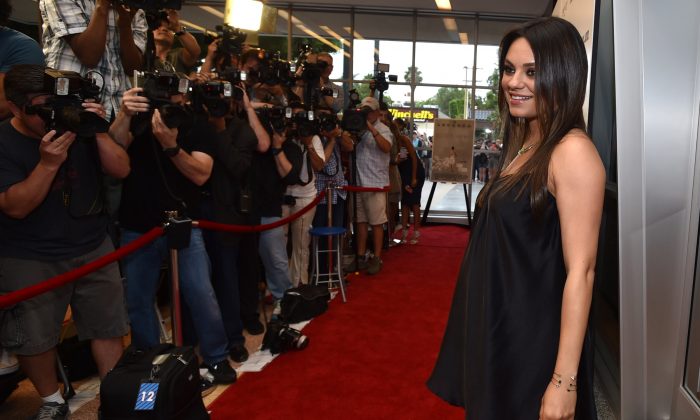 Mila Kunis has portpartum depression and is having a tough time being a mother, a new report says.

Kunis, 31, and Ashton Kutcher, 36, had their first child recently.

Life & Style magazine says that Kunis is “miserable” and is having “a rough go of motherhood.

A source told the tabloid that the new mother spends “a lot of time in bed” and feels that she’s fat and worries that she “will never lose the weight.”

On the other hand, a source close to the actress told Gossip Cop that the story is “100 percent not true.”

The article comes about a week after the magazine said that Kutcher is planning a $2 million wedding for him and Kunis.

That report also claimed that the couple wants to try for another baby soon.

The pair have not said publicly whether they want another child so soon, although they have expressed excitement about being parents.

Kutcher told the Today show that “The transforming experience of becoming a parent, it’s all true.”

“It’s unbelievable. It’s the greatest thing on earth,” he added about his daughter Wyatt. “As soon as this child was born I immediately like wanted to call my parents and just apologize because I never knew how much they loved me.”

In the meantime, the couple has placed the traditional red bracelet as a talisman to ward off evil as part of their Kabbalah religion, according to the National Enquirer tabloid.

“They’re very much into it. They feel it’s not a religion, but a way of life.”

In accordance to their beliefs, the couple and their child stayed home for weeks without letting anyone else near the baby.

“They (the family) were hurt and everyone thought it was weird,” the insider said. “Mila had Ashton explain that because of their beliefs, they weren’t allowing visitors. Mila also