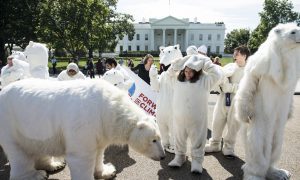 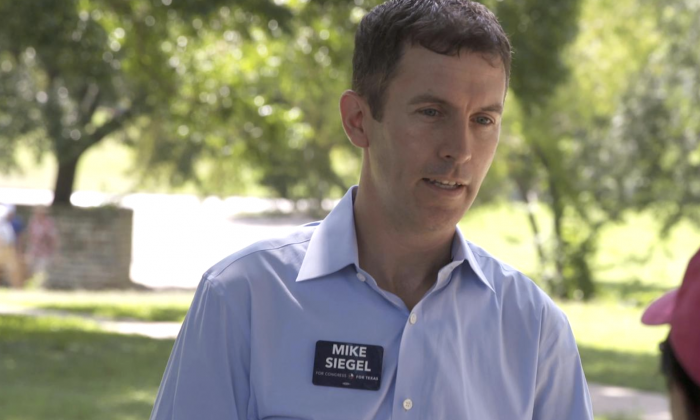 The son of one of America’s most militant communist radicals is challenging the chairman of the House Homeland Security Committee for his Central Texas congressional seat.

A self-described former “civil rights lawyer” and “community organizer,” Mike Siegel cut his political teeth on his efforts to stop key provisions of Texas Senate Bill 4, which was signed into law by Texas Gov. Greg Abbott in May 2017.

Dan Siegel was an activist at University of California, Berkeley at the height of the Vietnam War in 1969. On May 15 of that year, Siegel and fellow students clashed with riot police over the radical hotbed “People’s Park.” The day would become known as “Bloody Thursday” after a student was killed by police bullets during the violence.

Circa 1970, Dan Siegel was one of the earliest founders of the socialist New American Movement (NAM), an outgrowth of the radical Students for a Democratic Society (SDS). The NAM was later fortified by a split from the pro-Soviet Communist Party USA, before helping to found Democratic Socialists of America (DSA) in 1982.

Dan Siegel veered even further to the left, becoming a leading member of the ultra-militant CWP, which followed the policies of Mao Zedong, Joseph Stalin, Cambodian mass murderer Pol Pot, and for a time, the Islamists of the Iranian Revolution.

Dan Siegel served on the executive committee of the organization’s key front group Federation for Progress (FFP) alongside Judy Chu, who currently serves as a member of Congress in Southern California.

Meg Anderson, a CWP member from Indiana, alluded to the FFP in a letter to the now-defunct magazine of the Communist Workers Party / New Democratic Movement “The Expert Red” published in February 1985. The letter dealt with the practicalities of the party’s new Gramsci-inspired program of infiltrating “civil society.” Antonio Gramsci was an Italian Communist Party theoretician who advocated communist penetration of all institutions of “capitalist” society in preparation for socialist revolution.

“The main thing being understood about Gramsci’s ideas is that we have to be able to take part in life as other people do, thus moving ourselves beyond a limited world of our own making to the world that exists. The question still remains about what party visibility will mean,” Anderson wrote. “For example in the church there are progressive organizations whose program is even higher than our transitional demands in some ways. What shall I propose to their members? That they all join the Party? Or should I ask the key movers to join, and we meet secretly to act in director’s role? It seems to be the same role as FFP would play. Does that mean we virtually turn the FFP into the party, or vice a [sic] versa?”

In the mid-1980s, the CWP dissolved and re-constituted as the innocuously named New Democratic Movement (NDM), which explicitly sought to infiltrate the Democratic Party and other institutions.

According to City Journal, at a convention in mid-1985, Jerry Tung, general secretary of the former CWP, explained: “Once you get people elected or appointed to office, you can award contracts to friends. … When you can raise money for political purposes, when you do it in the right place in the right atmosphere, and look right, and the [mainstream] party bosses are there, then that money makes them take you seriously.”

Lawyer and CWP member Ben Connor elaborated further on the change in party tactics from one of traditional Marxist-Leninist agitation to a conscious program of infiltrating U.S. institutions in CWP‘s publication The Expert Red:

“It was time to assume leadership over the whole society … Rather than storm City Hall, we are donning tuxedoes, and preparing to enter through special invitation. We are learning to use our skills in ways that are proving far more dangerous to the ruling class, and far more beneficial to the masses to whom we have dedicated lives of service.

“You want me to be a Congressman? Fine, it’s what my mother always wanted for me anyway. It’s all very legitimate. For other new comrades as well, the road is wide open – we can follow any career path we choose, so long as it helps the Party lead and serve the American people.”

By 1986, Dan Siegel was one of three co-chairs of the NDM, alongside Phyllis Jones and the aforementioned Jerry Tung, who it should be noted also supported Dan Siegel’s failed mayoral bid in 2014.

By the early 2010s, Dan Siegel was a well-established Bay Area civil rights lawyer. Siegel Sr. was also serving as an adviser to Oakland Democratic Mayor Jean Quan, an old comrade from his CWP days.

Many former CWP members maintain a strong loyalty to the People’s Republic of China, including apparently Quan and Dan Siegel.

In May 2011, Quan lead a 12-member trade delegation to China organized and paid for by the Port of Oakland. The delegate list is unavailable, but Dan Siegel was in China at the same time, so it was likely that he was part of Quan’s entourage.

Dan Siegel penned an article for Truth Dig, published July 7, 2011, titled “New China will be Expert and Red” echoing the title of the CWP’s now defunct journal “The Expert Red.”

“The Chinese Communist Party has aspired to be both ‘Red’ and ‘expert’ since the 1950s. The party has carefully nurtured its cadre to ensure the organization’s commitment to the welfare of the majority, but at the same time recognizes the need for its leaders to embrace and implement the most advanced concepts in science, technology and management. The partnership of the ‘idealistic’ Mao Zedong and the ‘pragmatic’ Zhou Enlai long put human faces on the two sides of the CPC’s ideal,” he wrote.

Like his father, Mike Siegel has been a lifelong activist.

At Cornell University, Mike Siegel was president of the far-left National Lawyers Guild student chapter. He then served as an intern at the equally radical Center for Constitutional Rights, where he worked as legal coordinator for the “Winter Soldier: Iraq and Afghanistan” conference presented by Iraq Veterans Against the War—a group closely affiliated to the pro-China Freedom Road Socialist Organization.

Mike Siegel has been endorsed by Progressive Democrats of America, Texas Alliance for Retired Americans, Our Revolution, and Left Up to US, all fronts for Democratic Socialists of America (DSA).

Even deep in the heart of Texas, socialist revolutionaries are infiltrating the Democratic Party with very little opposition—from either Republicans or moderate Democrats.

Most American politicians think in terms of two-year election cycles. Communists plan in terms of decades, even centuries. Mike Siegel is part of a long-range strategic plan to infiltrate the U.S. government, a legacy passed down from his father.